Tuesday, After Christmas (August 12th and 13th at the Cleveland Cinematheque)

[TUESDAY, AFTER CHRISTMAS screens Friday August 12th at 7 pm and Saturday August 13th at 9:25 pm at the Cleveland Cinematheque.]
Review by Bob Ignizio 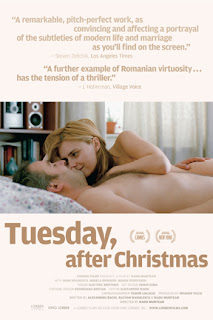 TUESDAY, AFTER CHRISTMAS opens with a lengthy static shot of two nude people in bed talking. Paul (Mimi Brănescu) is a married banker. Raluca (Maria Popistaşu) is not his wife, but rather his daughter's orthodontist. The affair between these two has been going on for a while now, and it's getting to that point where Paul is going to have to make a choice. But with the holidays just around the corner, it hardly seems like the time to spring the news on his wife Adriana (Mirela Oprişor). Nor would it be much of a Christmas present for his daughter Mara (Sasa Paul-Szel).


Director Radu Muntean's camera maintains an aloof, dispassionate view of the proceedings throughout the film. He's merely showing us these people and their lives, in incredibly intimate detail, and leaving it to the audience to pass judgment as they will. This feels like an accurate portrait of one man's willful destruction of his family for a rather shallow, but nonetheless typical, reason. The performances are believable and nuanced, and nothing about them or any other aspect of the film rings false.
There is no shortage of serious and somber movies in which middle-aged bourgeois men leave their loyal and long-suffering wives for younger women. That these kind of circumstances seem to happen disproportionately to movie directors probably goes a long way towards explaining that. I have no idea if director Radu Muntean is drawing on personal experience here or not, but who am I to begrudge him his take on the subject, provided it results in a good movie?
It was in a piece by Roger Ebert that I first saw this quote from critic Robert Warshow: “A man watches a movie, and the critic must acknowledge that he is that man.” In that context, while I recognize this film's quality, as the man watching the movie, I did not like it. I believe the film achieves what it sets out to do, but I'm not convinced it has anything to say on the subject of middle class male ennui that hasn't been said in films before. It's not pleasant to watch, and the intentionally subdued pacing and tone become tedious. That a sizable portion of those who see this film will have a more positive reaction I do not doubt. I would very much understand their reasons why, while at the same time holding firm to my own opinion. The star rating system comes up short at times like this, but for those who must have a numeric evaluation, here it is. 2 1/2 out of 4 stars.
Posted by Bob Ignizio at 12:01 AM