Those Lips, Those Eyes ( August 6th at the Cleveland Cinematheque)

[THOSE LIPS, THOSE EYES screens Saturday August 6th at 7 pm at the Cleveland Cinematheque.] 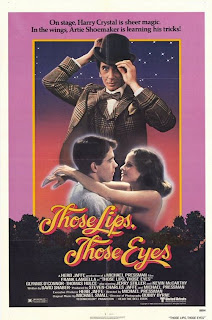 Yes, it was me. I was one of maybe 20 or so people in the audience (alongside my poor embarrassed-by-the-sex-scenes mom) who saw the locally-filmed, locally themed 35mm release THOSE LIPS, THOSE EYES in a real live movie-house during its 1980 small-scale release. Even then, I supported local filmmaking. (fat lot of good it would end up doing me), even this coming-of-age comedy-drama. And I had high hopes for the ostensible subject matter, community theater. Yes, today you couldn't pay me to go to live theater (well, yes, you could pay me, but it would have to be a lot, and I would like the option of not showing up), but back in my innocent teenage years I was most active in it.

Community theater just about comprised my whole social life, and I wasn't even gay. What can I say? It was fun, the talented people seemed cool, and the showbiz glamour fed into my growing literary, artistic and even cinematic interests. Plus it was the crappy '70s in Cleveland, and I just wasn't into getting drunk at the Stadium, stoned in the Flats or coked up in the discos. Yeah, I should have jumped early into computers, for the career, but shelling over a thousand bucks for a TRS-80 from Radio Shack? I must have figured I'd cause my parents less pain by going into live theater.

So I felt an affinity for the premise. Setting is none other than Cain Park in Cleveland Heights. Local actor of note David O'Frazier is prominent in the cast, but imported Hollywood talent filled out the main roles, especially young Tom Hulce portraying Artie, a nebbishy medical student who gets bitten by the theatrical bug and signs up as a prop-boy at Cain Park for the season's big musical. There he gets mentored in the ways of the world by the troupe's flashy leading man Harry Crystal (Frank Langella, himself a real-life reigning king of Broadway at the time), endures the insults of a tyrannical director, and has a heartfelt but sadly short-lived affair with a chorus girl who turns out to be Just Not That Into Him. Harry Crystal himself turns out to be less worthy of hero worship than he first seems, too, but hey, as the saying goes, the show must go on.

A few films have, I think, caught the boyhood magic of live theater, especially the Australian children's picture called WHAT THE MOON SAW and the wonderful framing device of the direct-to-video version of JOSEPH AND THE AMAZING TECHNICOLOR DREAMCOAT (if I let it slip that I haven’t seen any of the Disney HIGH SCHOOL MUSICAL series I’ll get the sack, right Mr. Ignizio?). But THOSE LIPS, THOSE EYES? I'm afraid even as a teenager I could see most all its clichés and stereotypes coming miles off (and I had yet to live half them out myself - no Cain Park for me, nosiree) and found Michael Pressman's direction pretty A to B and TV level. Come on, would an additional wide-angle lens shot or two have hurt? Was Cleveland so dirt-ugly it wouldn’t even merit a nice establishing shot? Okay, don’t answer that last one.

Still, if you want a propmaster-for-dummies tutorial, there's a very effective one here, as Artie gets a lecture on the need for proper scale. I guess there's nothing terribly wrong with THOSE LIPS, THOSE EYES, but in the end it didn't do much for me, though it gets certain points for North Coast nostalgia. And as for live theater, I lost interest in it with adulthood. Movies seemed more interesting - which shows how very little I learned. Should've begged a job at Radio Shack, offered to work off the cost of that TRS-80. (2 1/2 out of 4 stars)
Posted by Charles Cassady Jr. at 12:01 AM