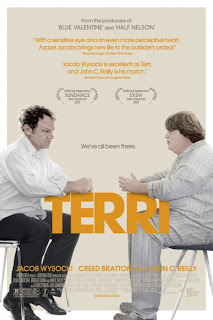 Terri (Jacob Wysocki) is an overweight teen who wears his pajamas to school because they feel comfortable. Some of his classmates laugh at him, but Terri has bigger problems. He just does what he has to do to get through the day so he can get back home and take care of his uncle James (Creed Bratton) who is suffering from Alzheimer's disease. As the saying goes, James has good days and bad. When one of those bad days makes Terri late for school, he gets sent to see the principal, Mr. Fitzgerald (John C. Reilly).
To Terri's surprise, Mr. Fitzgerald already knows him by name, even though this is his first time in the principal's office. Fitzgerald explains that there are two kinds of kids whose names he remembers: the good hearted, and the bad hearted. He says Terri is one of the former.
Fitzgerald genuinely cares about Terri and some of the other outcasts in the school, including Terri's friend Chad (Bridger Zadina). His techniques occasionally backfire, though, causing Terri to doubt the man's sincerity. The real issue, though, is that Terri wishes he didn't need anyone's help. When a popular girl named Heather (Olivia Crocicchia) is threatened with expulsion for an incident in which she was in fact a victim, Terri gets a chance to help someone else and prove to himself that he really is one of the good hearted kids.
Despite a plot which provides ample opportunities, TERRI never goes for cheap, artificial drama. Even when the kids do the kind of things most parents hope their sons and daughters aren't doing (even if they did the same things themselves at that age), director Azazel Jacobs depicts these activities in a matter of fact way.
Not every kid who gets picked on commits suicide or shoots up their school. Not every kid who experiments with drugs and/or alcohol winds up overdosing or becoming an addict. I say this not to condone such behaviors, and I don't think the movie does either. But a movie that takes a less sensationalistic approach to such issues might benefit kids as much, if not more, than one that focuses only on the worst potential outcomes. The way these issues are dealt with in TERRI is a lot more like what I remember from high school than something that borders on being an exploitation movie like Catherine Hardwicke's THIRTEEN.
Whenever you have a character as quirky as Terri, there's a real danger of him coming across as a caricature. That doesn't happen here. Jacob Wysocki gives a nicely understated performance in the lead, creating a believable portrait of a kid who is a little weird, but basically a good person. It's also great to see John C. Reilly playing a more serious (if still a bit odd) role for a change. He's a much better actor than those who know him only from stuff like STEP BROTHERS might guess.
This is the kind of really good movie that tends to get lost in the shuffle, no matter when it comes out. It doesn't fit neatly into any genre, there aren't any big stars, and there's not really any kind of angle to sell it with. It's just a little slice of life character study that makes some keen observations about the world while still managing to be entertaining. It's easily one of the best films to come out this summer, and I really hope people go see it. 4 out of 4 stars.
Posted by Bob Ignizio at 12:01 AM