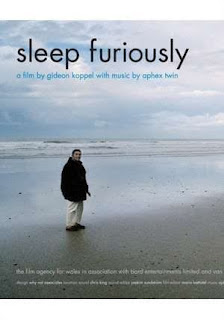 Like it or not, globalization continues its steady march. As it does so, the world becomes a more homogenous place, and certain cultures and ways of life begin to die out. sleep furiously details one such culture in the rural Welsh town of Trefeurig. It's where director Gideon Koppel grew up, a small village seemingly in the middle of nowhere, devoid of strip malls and fast food restaurants. Now Koppel has returned home to film the everyday happenings of this community and its dying way of life.


sleep furiously film instantly reminded me of THE SKY TURNS which had its Cleveland debut earlier this year, although it was filmed approximately four years prior. SKY TURNS director Mercedes Álvarez returned to her home town much later in its death throes, though. Almost nothing remained of the world she had known. All that was left to do was record a eulogy, albeit an extremely beautiful and moving one.
Koppel has arrived at an earlier point. The farmers still do more or less what their ancestors have done for centuries. The public school still has a small group of students, but will be closing for good soon. A bookmobile comes and goes regularly, and is well patronized by the locals who, despite living in bucolic isolation, appear better read and more intellectually curious than a lot of people. If you don't feel like reading, you can find recreation by going for a walk in the meadow with your faithful dog, or baking a homemade pie.
There's no attempt to tie the various vignettes that make up sleep furiously into any sort of linear narrative. It's a collage made up of little pieces of lives. There is humor and sadness and just plain day to day existence, and all of it is shot beautifully. The ambient soundtrack by Aphex Twin with its laid back pace compliments Koppel's images nicely. The film wasn't quite as compelling to me as THE SKY TURNS or the similarly meandering rural documentary SWEETGRASS, but sleep furiously is nonetheless a fine film. 3 out of 4 stars.
Posted by Bob Ignizio at 12:01 AM