[THE SILENT HOUSE opens in Cleveland on Friday August 5th exclusively at the Capitol Theatre.]
Review by Bob Ignizio 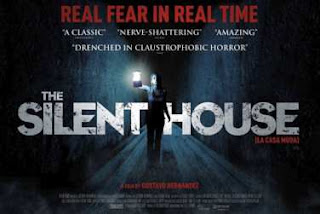 Based on true events! Shot on a digital photo camera! One continuous take with no edits! There is a long and respected tradition of using gimmicks and ballyhoo to bring attention to low budget horror films, but that's an awful lot of gimmickry for one movie. THE SILENT HOUSE (La Casa Muda) has more to offer than filmmaking stunts and dubious veracity, though. Director Gustavo Hernández uses his single camera's unblinking eye to create a feeling of claustrophobic voyeurism, tension and suspense, showing us very little at first and letting the terror build slowly.

Laura (Florencia Colucci) and her father Wilson (Gustavo Alonso) have been hired to clean up the run-down abode of the title by Nestor (Abel Tripaldi). Nestor leaves the two to get settled in, warning them not to go upstairs because it's dangerous. Not long after Nestor leaves, however, Laura hears unsettling sounds coming from above. Will she and her father investigate? It's a horror movie, what do you think?
Although not shot in true “first person” style, for the most part we follow Laura (Florencia Colucci) from a close distance and see what she sees. On those rare occasions in which she goes somewhere that the camera doesn't follow, we become even more on edge wondering what is happening. Most of the film consists of Laura exploring the dimly lit house and its strange contents. In that sense, it's not unlike 2009's HOUSE OF THE DEVIL.
Gimmick or not, I was surprised at how good the film looks for having been shot on a camera that wasn't designed to shoot a professional film. As for doing the film all in one take, Hernández does a good job of keeping it from seeming too forced. Alfred Hitchcock tried a similar experiment with his 1948 film ROPE, but due to the limitations of film (he could only shoot 10 minutes at a time before having to change rolls), he had to cheat by going in for close-ups of things that would fill the whole screen, hiding most of his edits. He also included some more intentionally obvious edits. THE SILENT HOUSE really does appear to be one long filming session, at least until about the 50 minute mark when the screen goes black and Hernández could have conceivably cut without anyone being the wiser.
For about two thirds of its running time, the tension and suspense are enough to make up for any rough spots. Then we get an out of left field plot twist in the film's third act that, while certainly surprising, feels more than a little contrived. It's not quite as grating as the twist in HIGH TENSION, but has a similar effect of sucking all the momentum out of the movie, at least for me. Also, as much as I like films that don't spoon feed everything to the audience, too much remains frustratingly vague by the film's conclusion. We're left to piece things together from a montage of Polaroids that accompanies the end credits. I admire what Hernandez has accomplished on a technical level, but the film is too much of a mixed bag to fully recommend. 2 1/2 out of 4 stars.
Posted by Bob Ignizio at 12:01 AM