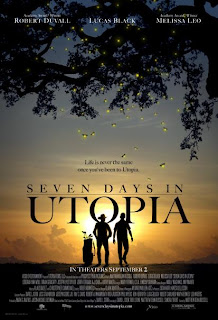 Figuring that, next to crime scene investigators, sports fans are probably the most vitriolic demographic when it comes to Hollywood’s careless, spectacle-minded portrayals of their passions, I made sure to have a golf lover in tow when I went to see first-time director Matt Russell’s inspirational golf drama SEVEN DAYS IN UTOPIA. The golfing, I was assured by my companion, is fine. Unfortunately, the inspiration and the drama are not handled half as reverently.

I may not know golf, but I do know slasher films, which means I also know better than to nitpick the narrative redundancies committed by a new entry into a tried-and-true sub-genre. So when aspiring golf superstar Luke Chisolm (Black) melts down at the last hole of a crucial game (Match? Round? I’m serious… I know nothing about golf), storms off, and wrecks his car in a just-east-of-bumblesnort Texas hamlet called Utopia, I can only smile when the hard-nosed rancher (Robert Duvall) who gallops up to help the dazed twenty-something turns out to be a disgraced former golf pro who’s only too willing to tuck the quick-tempered chick beneath his grizzled-but-wise, formerly alcoholic wing.


When the local cowpokes don’t cotton to the soft-handed city boy, I nod in cliché-embracing agreement. When the button-cute horse whisperer (actress/singer Sarah Jayne Jensen) shares her life story under a clear night sky full of stars, I grin and shrug. When Duvall’s rancher character Johnny Crawford takes the flight-reluctant golfer up in a single-engine plane, turns off the engine, and tells him to feel it out and land the plane, I was like, “Wait… what?!”

Yeah. Crash-landing a single-engine plane is like golf. Also like golf, according to Crawford’s eccentric tutelage: fly fishing, painting, and throwing metal washers into a can. Of course, I’m being a bit facetious. Golf (I'm told) is a game of intense concentration, requiring an even temper, a clear mind and sustained physical and mental focus. Crawford’s down-home country Zen is meant to hone Chisolm’s mind and put him in touch with, well, God.

This film approaches both golf, and faith, from a Christian perspective. And I gotta say, religious or not, the movie is a legitimately wholesome bit of family entertainment that forgoes all the jaded pop culture references, Top 40 mash-ups, and scatological pandering of its contemporaries. Outside of a few faith-specific scenes, the values – family, friends, love - extolled by Johnny Crawford are all globally applicable, nondenominational winners with which almost anyone ought to be cool. (That is to say: parents, even if your family are strict goat-gutting Satanists, the 10 minutes of subdued Christian proselytizing in this film are measurably less intrusive than the 90-plus minutes of ear-splitting capitalist regurgitations that constitute SMURFS.)

Story-wise, though, Chisolm’s journey to faith never quite clicks. The film’s well-intentioned G-rated tendencies ensure that Luke is so sympathetic, even from the beginning - when his tantrum is immediately justified by a slew of flashbacks featuring a cartoonishly overbearing father - that his struggle toward inner peace seems all too achievable, and, worse for a visual storytelling medium, all too internalized. Even more odd is the climax of the film, in which the writers seem to realize that fact, and create a confusingly intense one-on-one golf rivalry practically out of thin air.

Most frustrating, though, is Crawford’s insistence that oneness with faith – and with god – can only truly be obtained through the realization that winning is irrelevant. The journey is its own reward, it’s how you play not if you win, etc. And in a broad sense, all of those sayings and platitudes are true – hold up a single session (Quarter? Period?) of golf against the aforementioned values of family, friends and love, and it’d be stupid to take the under-par score along with a life of gravy-stained suicidal loneliness. Even assuming that in reality, that is the choice - winning or inner serenity - Chisolm is a professional golfer. It seems unfair to suggest that his faith should come at the expense of a healthy spirit of competition - a central aspect of his livelihood.

I still don’t know much about golf, but my movie going companion is an avid fan, and, for what it's worth, a practicing Presbyterian. Here’s what he had to say: “Plenty of golfers are good Christians, and all of them would kill to play in a championship. It’s their job, and they’re good at it. So, yeah, winning matters.” (2 out 4 stars)