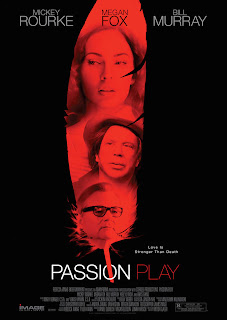 After its festival run the magical-realist drama PASSION PLAY went straight to DVD a few months ago, a curious fate for a motion picture with such star power: Mickey Rourke, Bill Murray and Megan Fox toplining, with supporting-cast turns by Kelly Lynch (wife of writer-director Mitch Glazer) and Bill Murray's underrated brother Brian Doyle-Murray. So why'd this skip theaters - yet SUCKER PUNCH struck? Call it the curse of Megan Fox.

And if I have a soft spot for this movie it's not because I believe I have a remote chance of scoring with Megan Fox either, but because it pulls off a neato, if derivative, surprise ending at the last minute that makes a lot of the previous pretensions and flaws forgivable. I think I'm a sucker for that. I liked the Don "the Dragon" Wilson direct-to-VHS cheapie FUTUREKICK for quite the same reason.

Shot in a New Mexico lensed voluptuously by famed cinematographer Christopher Doyle, PASSION PLAY has Rourke wearing his lived-in looks suitably as Nate, a once-famous photographer and musician now hitting the skids (some sort of Ansel Adams riff?) and reduced to minor horn playdates in the Dream Lounge (heavy-handed symbolism alert!), a bar owned by quirky gangster Happy (Bill Murray). Because of an offscreen indiscretion with Happy's wife, Nate is driven into the desert to be gangland-executed, but he miraculously escapes and discovers a strange carnival-sideshow amidst the scrub and sand, where ringmaster Rhys Ifans' freak show includes a beautiful but sad girl named Lily (Fox), a mutation abandoned as a baby. Lily has genuine (well, CGI) angel-like wings, though no ability to fly.

Nate and Lily escape the freak show and head back to the city, where Nate goes behind Lily's feathered back to make what he hopes is a mutually beneficial deal with Happy, to let the kingpin manage Lily's showbiz career and forgive Nate's offenses. Happy is, like Nate, transfixed by Lily - but he doesn't want to share her. Especially not with Nate.

And thus a dangerous paranormal magical-realist love triangle takes shape that doesn't break too many molds, as far as paranormal magical-realist love-triangle thingies go. In fact, a likewise premise, with no fantasy elements but similar elements of photography, heroine-sharing and Bill Murray very nicely cast against type as a gangster, blended beautifully in the Robert De Niro-Uma Thurman drama MAD DOG AND GLORY (also David Caruso's breakout film; check it out sometime). PASSION PLAY hits its tall-tale marks okay, with a sweet reverie-like atmosphere that may or may not pull in a jaded viewer who have seen Mickey Rourke drowning his sorrows in bars in plenty of other noirish movies, until [SPOILER ALERT] the final narrative twist that explains everything that's gone before, even the inconsistencies and the silly bits. And it worked for me, sentimentality and all, yes it did, despite being the umpteenth time pilfering of a certain Ambrose Bierce short story set during the Civil War at a place called Owl Creek Bridge...

So is Megan Fox any good? The camera adores her here, she acquits herself honorably alongside Rourke, Murray and Co., and I must say that if a slightly higher Q-rated pretty face and body - I dunno, Zoe Saldana, Monica Bellucci, Emma Stone, some hottie from the TWILIGHT cast – had portrayed Lily instead this picture might have gained a higher profile but probably wouldn't have been much better. And it's nice to see a chick with wings who isn't just another comic-book-superhero movie X-Men or Justice League character, dammit. (3 out of 4 stars)
Posted by Charles Cassady Jr. at 12:01 AM