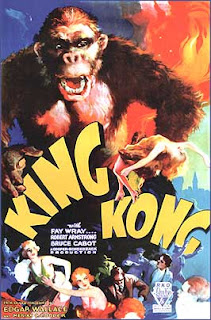 And Playhouse Square, in its heyday of yesteryear, was not only a live-theater venue of great renown but also a splendid place to catch movies, first-run and in roadshow-revival form, on the wide screen. To revisit – those golden days – and, most appropriately for today’s economic climate, the depths of the Great Depression – check out the original 1933 KING KONG, opening the 2011 summer series of Cinema On The Square this week.


KING KONG was intended by its creators - co-directors Merian C. Cooper and Ernest Schoedsack, documentarians and real-life explorers - as the greatest movie adventure ever. It fulfilled that hype for entertainment-hungry audiences in the thirties and long afterwards. Before the era of TV and home-video, KING KONG played in theaters for decades, and remains a beloved monster movie for all ages, though kids watching today might find its outlook, dialogue and stop-motion f/x by the great Willis O’Brien a little out-of-date.

Know that in the 1930s almost nothing like this had been seen before (though early Tarzan films and comics had certainly whetted the crowds' appetites). It opens with an expedition preparing to leave Hoboken docks for the South Seas, with an unusually large crew and a cache of weapons. A showman named Carl Denham (Robert Armstrong) heard that natives worship/fear something called "Kong," and he wants to get it on movie film and make a fortune. Before leaving he recruits a literally starving actress off the streets, Anne Darrow (Fay Wray), explaining (over the crews' objections) that the public always wants a pretty girl in the picture.

They reach the uncharted Skull Island, where a huge wooden wall separates the natives from a land of surviving Mesozoic-era prehistoric monsters. Kong is a 50-foot-tall gorilla, to whom the tribe periodically sacrifices a maiden (what Kong will do with them is never discussed in detail). The tribe wants blonde Anne as their next offering, but Denham refuses. They kidnap her anyway, and Kong is fascinated by the novelty of the golden girl. Kong heads back toward his mountain home with Anne screaming in his paw and the sailors follow their jungle trail.

After Kong saves Anne from attacks by numerous dinosaurs intent on making a meal out of her, Anne is hustled back safely to the ship. Correctly figuring that Kong will return searching for her, Denham knocks the monster unconscious with gas bombs and sails back to New York City with Kong in chains. He tries to exhibit "King" Kong in a Broadway-style setting, but Kong breaks loose and, following his jungle instinct, takes Anne to the highest ground in the metropolis - the Empire State Building - for a classic climax with WWI-style fighter-biplanes (Cooper and Schoedsack cameo as the pilots!). No matter how old KING KONG gets, that great Hollywood moment always thrills.

KING KONG v.1.0 moves at a thrill-ride pace. If the animation seems primitive, sometimes amusingly so (Kong's fur bristles constantly, due to the invisible special-effects artists touching him; full-scale, clearly puppet Kong head looks lifeless in its closeups), they are still very watchable. And the savage Kong does have a primal fury about him that makes him a real threat, even if his lovelorn looks to Anne turn him into a slightly more sympathetic monster.

The human characters are fairly one-dimensional by comparison. Anne screams a lot, famously so, faints, and that's about it for her womanly survival skills. Denham doesn't seem to have learned any lessons in the end, and may be a stand-in for the Cooper-Schoedsack team, who in a recent biography have been quoted as having racist-imperialist attitudes, typical for their era, about the supremacy of the white culture over all others.

Though later generations of admirers got messages out of KING KONG about civilization vs. the primordial wild, about the poignancy of the tropical captive in modern NYC, the unenlightened POV here doesn't seem to make any obvious objections to the brash humans and their profiteering mission, and you can feel free to squirm at the old-school portrayal of face-painted, bone-wearing tribesmen, though it could have been a lot worse, I guess. A black baby is one of the few characters of any color snatched safely from beneath the primate's trampling feet.

Of course, KING KONG was remade in 2005 as a gigabucks “event” flick by director Peter Jackson with all the modern talent and special effects of the 21st century, photo-realistic CGI and a running time way in excess. I must confess, I have not yet seen the Jackson version. Yes, I know, even Kong’s own creators at one point planned a remake of their own with the technological advance of color film (but never did it), so I suppose it’s not a great artistic blasphemy. Still, I’ll let the 1933 KONG’s memory be pristine for me – for the moment. 3 ½ out of 4 stars.
Posted by Charles Cassady Jr. at 11:25 AM