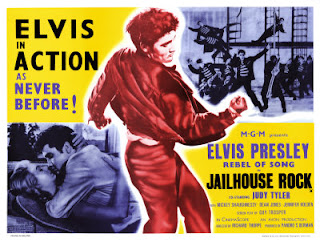 You know, ever since my college film society I’ve been pushing for a revival screening of 1957’s Elvis Presley classic JAILHOUSE ROCK. Nobody went along with my suggestions, not in college, not afterwards. Now, finally, here one is. Wish I could say someone had finally listened to me, but I don’t think anyone took my recommendation to heart and I’ve largely grown good and sick of movies in general. But for you, the young and non-jaded, be prepared for a solid lesson in Why Elvis Matters.


Behold the young, genuinely dangerous Presley of his prime and wonder how this guy could NOT have become a superstar. Elvis sneers his way through his third movie role (after LOVE ME TENDER and LOVING YOU). Presley persuasively portrays Vince Everett, a cocky, defiant youth (it’s a safe bet that James Dean and the troubled-youth drama were a big influence) doing prison time for manslaughter after accidentally killing a guy during a fracas in a saloon. While behind bars he learns how to play guitar and becomes a sensational music performer after his release. But Vince also takes a bad attitude with him out of the cellblock. The combination of stardom and being a tough guy leads him to act like a jerk to his girlfriend and pals, and Vince only has an awakening of his conscience when a punch in the throat threatens his new singing career - thus a rather melodramatic will-he-perform-again? finale. And don’t ask me about the medical accuracy either.

Aside from that hokiness I really got into the flick, even with its no-surprises storyline. Amidst Richard Thorpe’s workmanlike but efficient direction Presley's self-choreographed Lieber-Stoller title number leaps to life as a classic rock-film moment. I guarantee it will be raising goose pimples, especially shown on a big screen with a good sound system. You will not question again why, despite all the black-velvet artwork and kitsch souvenirs, people still think Presley was electrifying talent personified. This rock drama best preserves the early Presley's rebel appeal that made him legendary. Iconoclasts can joke, impersonators can camp it up, but this is Elvis, accept no substitutes. (3 1/2 out of 4 stars)
Posted by Charles Cassady Jr. at 12:01 AM