The Goonies ( August 6th at the Cedar Lee Theatre)

[THE GOONIES screens Saturday August 6th at 9:30 pm. and midnight at the Cedar Lee Theatre.] 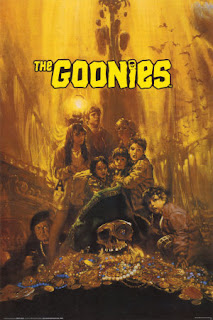 Produced by Steven Spielberg, with director Richard Donner aping the blockbuster wonder-boy filmmaker’s style, THE GOONIES sort of falls in between the scales of eighties-sucks! and eighties-rulez! Maybe one has to be Of A Certain Age (or below a certain level of maturity) to enjoy it, and the thing does somehow have cult cred, though the rambunctious, noisy, pirate-themed treasure-hunt action-fantasy.is as much an overproduced piece of Hollywood “product” as any corporate kitsch Marvel Comics adaptation today.


Helmer Donner (whose SUPERMAN: THE MOVIE is made the subject of one gag reference) at least got solid performances out of an ensemble of young talent, loads’a money to spend, and he had permission to borrow Spielberg's camera angles and lighting. Setting is a coastal town in the Pacific Northwest, where a homey, slightly ramshackle neighborhood called the Goondocks is threatened with foreclosure and redevelopment by nasty yuppies (amazing pop-culture trivia: The early SUV sports vehicles they drive are referred to reverently in the dialogue with the dated acronym "OVRs").

Local working-class kids, motley outcasts known as "goonies" (familiar stereotypes - the fat kid, the jock older brother, the Asian who's a gadget fanatic, etc.) are clearing out for eviction when they find a treasure map and clues to the legendary loot of a 17th-century pirate chieftain, `One-Eyed Willie'. With that kind of windfall the goonies could save their homes. Clues lead the kids beneath a closed-down restaurant, lair of a crime family of counterfeiters, who keep a super-strong, monstrously-deformed son Sloth (football star John Matuszak), chained up. The bad guys chase after the children, who must negotiate a number of deadly Rube Goldberg booby-traps set centuries ago by One-Eyed Willie in the maze of underground caverns and skeleton-strewn chambers.

Note the Amazing Fantasy Fun Fact that the frail Mikey, who acts as the brains and conscience of the goonies, is played by Sean Astin, who returned slogging through caves and tunnels when he starred as hobbit Samwise in the blockbuster LORD OF THE RINGS trilogy. Mikey's older sibling Brandon (Josh Brolin) tries to disassociate himself from the misfit goonies and hang out with the cooler guys at high school (most of whom seem affiliated with the greedy adults trying to tear down the shoreline), but by the end of the movie he's bonded with his kid brother. Of course, little emotional details like that are just small change compared with the theme-park-scale waterfalls, waterslides, drawbridges, and a full-sized treasure ship (aye, matey, no CGI) around which the plot is erected, with the cinematic philosophy that if you’re going to show one gargantuan tumbling boulder you may as well show a dozen. Jonathan Ke Quan had just starred as the engaging little-boy sidekick opposite Harrison Ford in the blockbuster INDIANA JONES AND THE TEMPLE OF DOOM, and it's easy to judge THE GOONIES as much the same - with less onscreen gore and pitched more obviously at the elementary and junior-high audience. And while there's nothing too wrong with that, THE GOONIES does feel every bit as long as its 114 minutes and contains some pretty obnoxious commercial-product placements and "cute" swearing.

In other words, the Bad News Bears in the Temple of Doom of the Caribbean. If that’s what you dig, okay. It’s my understanding that a sequel/remake is in the works, and I can’t imagine any good coming of it. (2 out of 4 stars)
Posted by Charles Cassady Jr. at 12:01 AM