The Good, the Bad and the Ugly (August 12 at the Palace Theatre) 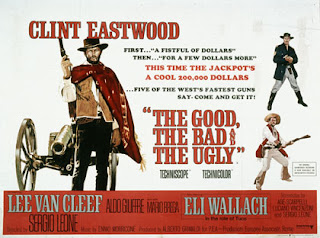 Little known fun fact: Clint Eastwood's Man-With-No-Name character in the 1964 A FISTFUL OF DOLLARS, Sergio Leone's first well-known "spaghetti western," was taken to be a really nasty piece of work for the cowboy-movie genre. He was a leading man who fought not so much for justice but for money and self-interest (though all the guys he killed happened to be villainous all the same). I am given to understand that when A FISTFUL OF DOLLARS first aired on TV, Hollywood was so nervous about the threat level of Eastwood's antihero that a non Sergio-Leone prologue was shot (with an Eastwood stand-in with his back to the camera) establishing that The Man With No Name is really a stalwart undercover US Marshall or something who just pretends to be amoral. I'd like to see that footage, if it exists. [Editor's note: it does exist, and can be found on the recently released Blu Ray edition of FISTFUL (or on Youtube)]


Another fun fact: Leone was recommended to cast the lean, little-regarded young American actor Eastwood as his recurring hero, when Leone originally wanted Henry Fonda or James Coburn. Anyway, by the time THE GOOD, THE BAD AND THE UGLY rolled around in 1967, Eastwood's stardom was assured, and so was Vietnam-era cynicism and weariness that upped the violence quotient. Some people consider TGTBATU to be not just the best Sergio Leone-Eastwood collaboration but the best western of all time.

There's no solid continuity with the earlier DOLLARS and its followup FOR A FEW DOLLARS MORE, but Eastwood is the same guy, an opportunistic gunman in Civil-War-era Texas, who has a routine worked out, rather unwillingly, with grubby Mexican bandit Tucco (Eli Wallach). No Name, a bounty hunter, turns in Tucco again and again for reward money, then rescues Tucco from hanging at the very last second. Tucco finally rebels and nearly kills No Name, but both of them hear different clues from a dying soldier as to the hiding place of a fortune in Union Army payment gold.

Tucco and No Name flee for sanctuary to Tucco's priest-brother (who gets berated by Tucco for going into the easy religion business instead of scheming/robbing for a living, like real men; the movie seems to agree with this), and the two proceed on their treasure hunt. But after the "good" and the "ugly" is the "bad," a truly sadistic outlaw named Angel Eyes (Lee Van Cleef, who, rather confusingly, played a different gunslinger character in FOR A FEW DOLLARS MORE). The private war between the trio is ultimately surrounded and engulfed by the background conflict of the Civil War, in which Angel Eyes has somehow attained a Union Sergeant rank.

And yes, for those keeping score, this Italian western follows Hollywood's GONE WITH THE WIND lead in giving the Confederates a little more admirable qualities than the Yankees, although when the Man With No Name participates in a suicidal attack on a bridge that's only of passing strategic importance, even he is shocked by the mass-slaughter and waste of life on both sides, a message not lost on 1967 Johnson-era audiences. With Mideast and Afghani wars now the only jobs currently hiring, it may be ignored by 2011 audiences, jamming on young Eastwood as a super-cool western action-icon, wry wit and rueful humor, the masterful widescreen cinematography, suspenseful showdowns, and Ennio Morricone's superb score. Best western ever made? Hard to say, given the many candidates, but this one puts up a good fight. (4 out of 4 stars)
Posted by Charles Cassady Jr. at 12:01 AM