[THE FUTURE  opens in Cleveland on Friday August 19th exclusively at the Cedar Lee Theatre.]
Review by Pamela Zoslov 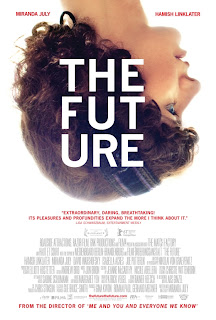 My expectations of THE FUTURE, the new film directed by and starring performance artist/writer/poet Miranda July, could not have been lower, having seen July’s directorial debut, ME, YOU AND EVERYONE WE KNOW. That movie, from 2005, polarized reactions into two camps: those, like Roger Ebert, who saluted July’s offbeat, quirky genius, and those who thought it was perfectly dreadful. I belong to the latter group. Not only was MYEWK an amateurish and hopelessly precious student-level film, it was badly misjudged, featuring wildly inappropriate scenarios involving children — one a 6-year-old boy — in adult sexual situations. What could Miranda July (a pseudonym) have been thinking? And what did her many devotees see in that movie? It was a mystery.
Since that inauspicious debut, July has developed considerably. THE FUTURE, while displaying a measure of the same preciousness and narcissism, has a winsome charm and surprising profundity. Whereas the previous film featured a largely amateur cast and annoying handmade music, THE FUTURE has professional actors, first-rate cinematography by Nikola von Graevenitz, and a real score composed by Jon Brion (ETERNAL SUNSHINE OF THE SPOTLESS MIND). The story centers on Sophie (July) and her boyfriend, Jason (Hamish Linklater). They have matching dark, curly hair and live together in a cluttered apartment. Jason does off-site computer tech support, and the lanky, doe-eyed waif Sophie teaches dancing to children. (The 37-year-old July has remarked that she hasn’t had a day job since she was 23, and she places her characters in unrealistic jobs; her protagonist in ME AND YOU drove a cab for elderly people and seemed to have but one client.)
The superstructure of the story is the haunting narration of an ailing feral cat (voiced by July, in a halting baby voice), whom Sophie and Jason have taken to an animal shelter for veterinary treatment. The cat, which has an injured forepaw and has been named “Paw Paw” by the couple, expresses her longing for a loving home. For some reason, the cat must be kept at the vet for 30 days (for an injured paw?). While Paw Paw dreams about her future “forever home,” Sophie and Jason decide that the looming deadline is somehow significant; by their Gen-X reasoning, they have one month to do something significant. Somehow, in this movie’s odd cosmology, the couple’s last month before having a cat is equated with their last month on earth. The movie periodically revisits the lonely, caged feline longing for her new owners, an initially annoying device that becomes surprisingly affecting.
Jason’s idea of doing something important is to quit tech support and solicit door to door on behalf of an environmental group. After having many doors closed in his face, he starts visiting with an eccentric old man who tinkers with electrical appliances and creates collages with obscene limericks to go with them (in other words, a perfect Miranda July hero).
Sophie, who compulsively watches homemade dance videos on YouTube, quits teaching and launches a “30 Days, 30 Dances” video project, which she abandons after several tentative starts. (Filming herself doing performance art is a major element of July’s artistic oeuvre.) Aimless, she drifts into a desultory affair with Marshall (David Warshofsky), a divorced businessman with a rough complexion and a gold neck chain that he tells Sophie is a signal to the ladies that he’s ready for sex. ME, YOU AND EVERYONE WE KNOW had July’s heroine crazily stalking a shoe salesman for no discernible reason. Sophie’s pursuit of has a slightly more plausible motivation, if only that her she and her gentle boyfriend are too much alike. It’s understandable that she might be attracted to , with his big house in the Valley and his high thread-count sheets.
What saves the film from succumbing entirely to July’s grating indie-girl narcissism is the fascinating trip it takes in the last act into the metaphysical. Jason, who had jokingly boasted of his ability to stop time, actually seems to wield this extraordinary skill when he fears Sophie will leave him. Everything stops, but at the same time, perhaps in a parallel reality, Sophie has left him for a new life with and his peculiar and preternaturally mature little girl (another July trademark), who likes to sleep in a hole she has dug in the backyard. Jason engages in a dialogue with the moon, which asks his help influencing the tides and admits, “I don't know anything. I’m just a rock in the sky.”
While Jason tries to forestall fate, the deadline arrives for Paw Paw’s homecoming. Has time really stopped? Is it too late for Paw Paw, and Sophie and Jason’s relationship, to be saved? The movie builds to a rather moving crescendo as these questions converge. (3 out of 4 stars)
Posted by Pamela Zoslov at 12:01 AM