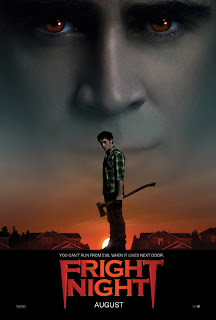 Tom Holland’s 1985 film FRIGHT NIGHT states its cultural raison d’etre less than 20 minutes in when obsolete late-night horror movie host and one-time b-movie icon Peter Vincent (Roddy McDowall) tells the film’s young protagonist that, “…your generation doesn’t want to see vampire killers anymore… All they want to see are slashers running around in ski masks...” Director Craig Gillespie’s 2011 remake needn’t be so concerned with communicating a thesis or biting its thumb at the current pop cultural zeitgeist. In 2011, vampires are everywhere. And while jaded horror traditionalists might wring their hands and claim that the scares are gone – that it’s all smoldering, bedazzled Cullens, bodice-doffing Bon Temps-ians (ites?) and histrionic vampire diaries – there are still plenty of requisitely nasty silver screen vampires, from Aussie DAYBREAKERS to the savage li’l eunuch from LET THE RIGHT ONE IN In to whatever the hell was going on in PRIEST. This FRIGHT NIGHT, then, is less a battle cry against a swiftly tilting paradigm than a single echo in a crowded cave.

Let me be clear here – FRIGHT NIGHT is really fun. The original’s simple, yet undeniably engaging, story remains largely intact: an awkward teenager discovers that his next door neighbor is a nightwalking bloodsucker and employs the help of a reluctant, cowardly horror icon to thwart the creature before it noms its way through a development-load of white suburbanites. Shoring up the already solid plot are two incredibly enjoyable performances: Collin Farrell’s apple-munching next-door Nosferatu (“Jerry” to his neighbors) bleeds manipulative, wife beater-wrapped sociopathy, while David Tennant devours scenery as the debaucherous Las Vegas stage magician/self-proclaimed vampire expert/perpetual inebriate Peter Vincent (a huge, though largely successful, diversion from McDowall’s delightfully pretentious aging thespian in the original).
The film’s protagonist - pubescent everykid Charley Brewster (Anton Yelchin) - is a different story. Maybe it’s Yelchin’s understated performance, which, for better or worse, is dwarfed almost instantly by Farrell’s leering swagger and Tennant’s stumbling, shirtless bravado, but Brewster comes off as a perpetually shocked-looking exposition magnet around whom engaging characters and interesting set pieces congregate, but who is otherwise just going through the motions of rote horror heroism. Meanwhile, the teenagers surrounding him, including his girlfriend Amy (Imogen Poots) and fair-weather Frenemy ‘Evil’ Ed (the ubiquitous Christopher Mintz-Plasse), help ensure that every scene without an adult actor feels lost and unfocused in an otherwise straight-shooting, story-conscious movie.
Part of the problem is screenwriter Marti Noxon, who spends the first 15 minutes of the film showing all the teenage characters gabbing in galloping, inexplicably clever, while still obscenity-laced, dialogue. Given the current Apatow-saturated, post-Diablo Cody cinema landscape, it grates like sandpaper. (Also, I could do without the pandering, snarky TWILIGHT jabs.) Noxon did fantastic work in the realm of smart, slangy teenspeak as a head writer – and even the Season 6 showrunner - of Josh Whedon’s superlative television series Buffy the Vampire Slayer, but she seems to have forgotten that the way adolescents talk in Buffy is very specific to Whedon’s own (highly divisive) dialectic voice – it’s not a language you can pepper with masturbation jokes and then sell as authentic . It’s especially unfortunate given that the adult characters have some legitimately interesting and, in the case of Vampire Jerry, creepy, exchanges with the kids.
Noxon and Gillespie manage some fantastic action and horror sequences, including an explosive death scene that’s purposefully worked in as the horrific punchline to one of the film’s most cliché suspense sequences, and a ridiculously enjoyable car chase-turned-showdown, but they seem to have a slavish obsession with structure and following screenwriting “rules,” which works to the detriment of the larger piece. Maybe they didn’t trust that the film was entertaining enough to keep audiences fully on board. Maybe they didn’t trust that jaded, modern audiences could just sit back and have fun watching an alcoholic magician fight vampires. Either way, they give Peter Vincent a ridiculous ham-fisted backstory that’s less tear-jerking than it is time-wasting, they invoke a paper-thin FRIGHT NIGHT-specific vampire mythology to help explain vampire behavior, and, most egregiously, they randomly introduce a magical artifact that’s equivalent to a gun that shoots happy endings.
It’s a shame, too. I was willing to go along with it wherever, Mamet-tested, audience-approved screenwriting dogma be damned. The movie is tight and maintains a ripping pace, all the while upping the ante, horror-wise. There’s no shortage of cartoonish bloodshed, over-the-top violence and generalized, neck-ripping vampire nuttiness. Pile that atop more than several gleefully groan-worthy 3-D gratuities and my disbelief was so suspended, it was practically expelled. FRIGHT NIGHT is fun, but it doesn’t live up to its full potential. It could’ve really broken the rules, and committed to being the sort of midnight movie that Tom Holland’s original Peter Vincent would have hosted – soapy, reckless, bloody and, most of all, joyful. Instead, It’s maybe a bit more like the magic act performed by Gillespie’s reimagined Vincent – entertaining, scary and sensational, but, ultimately, lessened by its reliance on the banal mechanics of its execution.2 1/2 out of 4 stars.
Posted by Matt Finley at 12:01 AM