Dope Island: Cleomania - Not a review of Cleopatra, at the Palace Theatre August 13th, but an incredible simulation

If this were a typically righteous, all-American, God-fearing entry in the Cleveland Movie Blog it would be a straight review of the 1963 epic CLEOPATRA, featured in lavish big-screen revival form at the 2011 Cinema on the Square series at the Palace Theatre in Playhouse Square. Scheduling of the title seems to be the official tribute to the late, legendary Elizabeth Taylor, deceased earlier this year, even though few people would accord CLEOPATRA the rating of her best movie, just the most notorious and talked up.


Here's where I should put in my learned opinion (or whatever I can paste in off Wikipedia or something; I hear all reviewers just do that now), but I cannot in good conscience...as I haven't really seen CLEOPATRA in full. Just bits here and there wandering into the room while it was on the DVD. Did you know there's a bare-breasted dancing girl in the huge processional when Cleo enters Rome as a guest of Marc Anthony? The dancer is wearing tiny pasties and briefs, but otherwise she is notably and delectably naked for a mainstream 1963 picture. I don’t want to sound like Mr. Skin or something, but it did amaze me; she wouldn't look out of place in the obligatory topless strip-club scene of an R-rated late-1980s/early 1990s buddy-cop potboiler. How'd that get past the Centurion censors of the ancient studio system?

But anyway, what I want to call your attention to is not so much CLEOPATRA itself but rather CLEOPATRA: THE FILM THAT CHANGED HOLLYWOOD. It's an American Movie Classics documentary that appears as an "extra" on the Fox deluxe DVD release of CLEOPATRA, and is one case when the extra is not only as good, if not better, than the main feature. It's a cinematic event in its own right (at 120 minutes). And watching it in the comfort of your home theater lessens your chances of getting mugged and/or your car stolen on Euclid Avenue, let's face it. 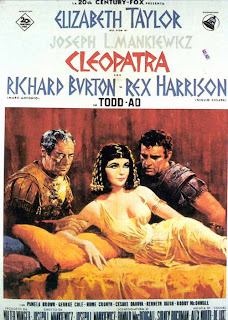 Gossipy and addictive as watching a train wreck in slow-motion (with particularly red-carpet sexy passengers), this nonfiction from tag-team directors Kevin Burns (who has done of lot of AMC docs) and Brent Zacky expertly tells the tangled and bittersweet saga of the archetypal "runaway" production. Frame-for-frame, the 1963 CLEOPATRA probably still ranks as the most ruinously expensive film ever made in the free-market world. Contrary to popular belief, the film was not a box-office flop. It filled theater seats for months and gained several Oscar nominations. But after years in preparation eagerly chronicled in the press, of nightmare production delays, reshoots, the tabloid-scandal romance between married (and remarried) stars Elizabeth Taylor and leading man Richard Burton, and even a nasty tell-all book by some estranged participants published to coincide with the release, the perception remains that this was a turkey.

Unfair, say some, to the heroic efforts by director Joseph L. Mankiewicz to amp up into Art what was originally conceived as an economy-minded (about $2 million) costume quickie, probably to star Joan Collins as the mythic Queen of the Nile (meant as no put-down to Ms. Collins, who recently allowed herself to be photographed visiting the Rock Hall of Fame in Cleveland; I don't think Liz Taylor ever did that). But along the line, through the wicked alchemy of hubris that nothing like showbiz and occasional dictators dreaming of world conquest, the scale and ambition of the project grew and grew...and grew...and grew...until a city-sized set was constructed in Italy. Liz signed on as the first thespian to command a $1 million salary. She stayed during the shoot not in a luxury trailer dressing room but a custom-built villa, and with her largesse came a succession of health crises and love affairs, chiefly with Richard Burton, which alternately endeared and repulsed the voyeuristic public.

Meanwhile behind-the-scenes backstabbing and power intrigues went on in faraway Hollywood boardrooms, with producers like Walter Wanger and Spyros Skouras and the depleted Mankiewicz numbered among the casualties. It explains a lot that Mankiewicz dearly hoped to make two grand-scale historical dramas back-to-back, "Caesar and Cleopatra" and "Anthony and Cleopatra," and was compelled by the studio to brutally trim his painstakingly worked-over script and fuse the material together into one 243-minute "abridgement" that was greeted by many critics and satirists (Mad Magazine among them) as a sloppy mess and poster-child for moviemaker ego and madness.

Among the casualties, we're told (especially by surviving cast member Martin Landau), was supporting actor Roddy McDowell, who as Octavian, obsessed rival for Roman rule against Marc Anthony, turned in a performance that may well have won him an Oscar, but his best moments wound up on the cutting-room floor. McDowell, a zealous movie collector-archivist-preservationist even before such terms were known, was among those who tried ever since to piece together from scraps and discards in the vaults the definitive "Director's Cut" of CLEOPATRA. Maybe someday, the documentary concludes, we'll have a two-parter, approximating what Mankiewicz wanted. But the documentary was made in 2001, so don't hold your breath for CLEOPATRA AND THE DEATHLY HALLOWS.

How exactly CLEOPATRA "changed Hollywood," except for setting new high points of wretched excess, isn't exactly clear, as films like WATERWORLD, TITANIC and STEALTH go on to show that high-stakes gambles of blockbusters continue to be made. And now we hear that Brad Pitt and Angelina Jolie have been talked up as leads in a new version of the life and loves of the Queen of the Nile. Add Charlie Sheen as Octavian, Britney Spears or Lindsay Lohan as the naked dancer, or Marc Antony as, well, Marc Anthony, and the formula for excess and tabloid overdrive will start again. Anyway, look up this documentary, and keep the asps and the archers handy. For the agents and the TMZ paparazzi.
Posted by Charles Cassady Jr. at 12:01 AM