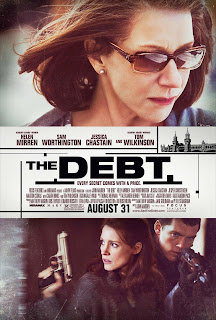 It's a good thing other countries still make original movies, or else Hollywood might run out of stuff to remake. THE DEBT is a redo of the award-winning 2007 Israeli film Ha-Hov, at present unreleased in America. With SHAKESPEARE IN LOVE director John Madden at the helm and a prestigious cast that includes past Oscar winner Helen Mirren and Oscar nominee Tom Wilkinson, it's obvious that the producers of this American version are hoping to replicate that success.
The plot concerns 3 Mossad agents – Rachael (Jessica Chastain/Mirren), David (Sam Worthington/Ciarán Hinds) and Stephan (Martin Csokas/Wilkinson) who in 1966 are given the mission of bringing Nazi war criminal Dieter Vogel (Jesper Christensen) back to Israel for trial. They capture the man in East Germany, but before they can smuggle him to the west, he escapes from his bonds and attacks Rachael. She recovers from the attack and shoots Vogel dead before he can escape, winding up with a scar on her face as a souvenir in the process.

In 1997, the three aging spies are considered heroes. Rachael's daughter has just written a book about the trio's past exploits, albeit without her mother's participation. However, on the eve of publication a news story threatens to break that throws the official story into doubt. Just what did happen back in 1966, what were its repercussions, and will the agents let the truth come out or take drastic measures to ensure it stays hidden?
THE DEBT is a decent enough thriller when it isn't putzing around. Most of the cloak and dagger stuff in 1966 plays well, and of course the cast is excellent. Although Madden isn't exactly known for making action films (his previous attempt, 2009's troubled KILLSHOT, was a disaster), he seems to have a decent enough handle on the fight scenes and chases here. The problem is with the overly padded script by Matthew Vaughn, Jane Goldman, and Peter Straughan that saddles the film with a tepid love triangle and a weak, unsatisfying ending, and the film's central theme about the destructive power of a lie on those who tell it doesn't have as much impact as it should. I'd be surprised if this would-be Oscar bait gets any nibbles. 2 1/2 out of 4 stars.
Posted by Bob Ignizio at 12:01 AM