[CITY OF LIFE AND DEATH screens Friday August 26th at 9:30 pm and Saturday August 27th at 7:00 pm at the Cleveland Cinematheque.]
Review by Bob Ignizio 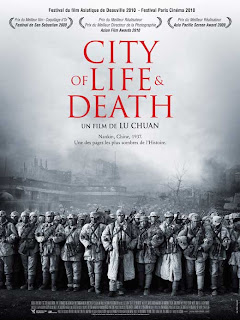 I'm not going to lie to you folks. I'm no expert on World War II. I'm pretty sure my public school education never even touched on the Massacre of Nanking, the subject of CITY OF LIFE AND DEATH (Nanjing! Nanjing!). Heck, I'm not even sure they mentioned that China was involved in World War II. As for my “college career”, I never quite made it to a decent world history class. So what little I know on the subject is mainly from hearing about the massacre from more recent news items that pop up now and then, usually when some Japanese official or another says or does something related to the horrific incident that the Chinese take offense at. And it's hard to blame them for their sensitivity, even after all these years.


Although the Chinese and Japanese disagree on numbers and details, everyone except the most rabid revisionists agrees that a huge number of unarmed Chinese civilians and POWs were executed by Japanese soldiers after they captured China's then capitol city Nanking in December of 1937. In addition, thousands of Chinese woman were forced into prostitution as “comfort women” for the occupying army.
Since CITY OF LIFE AND DEATH is a Chinese production, it's not surprising that it goes with a death toll on the high end: 300,000. What is surprising is that the film's main character, Kadokawa (Hideo Nakaizumi), is a Japanese soldier who is presented in a sympathetic light. To show just how strong feelings on this issue still run in China, that narrative choice earned the film's writer and director Chuan Lu death threats from some of his countrymen.
The film begins with Kadokawa's unit mopping up the last pockets of resistance in Nanking. Both sides do their best to kill as many of their enemies as they can, but the outcome is never in doubt. Like it or not, we're used to this kind of brutality in war. We can understand it, even if we don't like it. It's what comes after the Chinese surrender that is truly shocking. Unarmed men and children are lined up and gunned down en masse. Miraculously, child soldier Xiaodouzi (Bin Liu) and Shunzi (Yisui Zhao), a friend of the boy's father, survive. The two survivors make their way to a safety zone operated by Nazi party member John Rabe (John Paisely) and his secretary Mr. Tang (Fan Wei). Rabe was a real historical figure who managed to save a lot of lives thanks to his party connections. There's only so much Rabe can do, though.
As the occupation of Nanking wears on, things go from bad to worse and Kadokawa has difficulty accepting what he and his fellow soldiers are doing. The only thing close to a bright spot is Yuriko (Yuko Miyamato), a Japanese prostitute the conflicted soldier falls in love with. Eventually Kadokawa's crisis of conscience comes to a head, and he must make a choice between blindly following orders, or doing what he believes is right.
Performances are excellent, particularly Nakaizumi who has to play his character in such a way that none of his fellow soldiers are aware of his doubts, but the audience is. Yu Cao's black and white photography looks amazing, giving the film the feel of old newsreel footage. Although Chuan Lu focuses more on his characters than the atrocities going on around them, it does not diminish the horror. Again, I do not know enough on this subject to say how historically accurate the film is. Taken at face value, though, it's an extremely powerful and affecting piece of cinema, and likely to wind up near the top of my list for the best of 2011. 4 out of 4 stars.
Posted by Bob Ignizio at 12:01 AM