Cameraman: The Life and Work of Jack Cardiff (August 5th and 6th at the Cleveland Cinematheque)

[CAMERAMAN: THE LIFE AND WORK OF JACK CARDIFF screens Friday August 5th at 5:30 pm and Saturday August 6th at 9:10 pm at the Cleveland Cinematheque.] 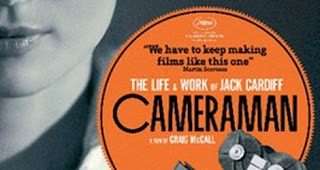 Ever play that mental game in which you daydream about which big showbiz star you would have liked to have been? I'm sure a lot of the online readership of the ideal age demographic would have no trouble deciding: Amy Winehouse. "She, like, was beautiful and she did everything and went everywhere and lived to be, like, really, really, way old, like almost 30 or 90 or something."


For my part I tended to look toward movie directors as the sort of people who enjoyed a, well, director's chair-eye-view of the pageant of life. But for a gentleman who truly had an enviable stay at the eyepiece, check out the documentary CAMERAMAN: THE LIFE AND WORK OF JACK CARDIFF, a nonfiction bio of the prolific and long-lived filmmaker who - though he turned director for a span - had an incredibly rich/varied run as a cinematographer of the highest quality. As a result of this (and the various movie studios not being greediguts about licensing all the best excerpts), this is an exceptionally beautiful-looking examination of the art of celluloid cinematography, as clips from BLACK NARCISSUS and A MATTER OF LIFE AND DEATH and THE BAREFOOT CONTESSA are so exquisite any movie lover would be content just to let them play out by themselves, like a visual mixtape.

Thus Jack Cardiff's saga becomes more of a story of the first 100 years of cinema itself - even more so considering that worshipful director Craig McCall doesn't seem to press (or isn't much interested in) Cardiff's offscreen life, which evidently included the usual showbiz multiple divorces and a new marriage in his 90s (okay, anyone going to change their career plan to cinematographer now?). Dude is a gentlemanly storyteller, full of rich behind-the-scenes anecdotes, though a bit smug as he points out all the sex-symbol leading ladies he photographed as the utmost in feminine perfection (Marlene Dietrich, Ava Gardner, Audrey Hepburn, Ingrid Bergman, Marilyn Monroe) and how many of them he's outlived now (except Sophia Loren). That the now equally dead Charlton Heston is one of the interviewees tells us CAMERAMAN was a production long in the making, and Heston is joined by Martin Scorsese, Lauren Bacall, Richard Fleischer and a stroke-stricken Kirk Douglas - who says he doesn't do many interviews these days but will always put in a good word for Jack Cardiff.

Cardiff himself began in silent-era British cinema as a child actor but soon went behind the scenes and rose in ranks as an accomplished cinematographer, known for being both quick and skilled. A career breakthrough came when he was selected for special training as the first director of photography in the UK to be certified in Technicolor. As Cardiff tells it, he passed the exam not through excellence in photon mathematics or chemical emulsions, but because he could answer questions on how master painters like Rembrandt lit their subjects. An artist himself with brush and palette, Cardiff would end up doing portrait studies of his various leading ladies.

One wonders how he found the time, though, in between shooting WINGS OF THE MORNING (the first British "colour" feature), THE AFRICAN QUEEN, SCOTT OF THE ANTARCTIC, UNDER CAPRICORN, THE VIKINGS, THE PRINCE AND THE SHOWGIRL, PANDORA AND THE FLYING DUTCHMAN, DEATH ON THE NILE, GHOST STORY and a series of visually glorious, rule-rewriting productions for the team of Michael Powell and Emeric Pressburger. Ultimately Cardiff spent a term as a director himself, turning out what looks like one bona fide masterwork (SONS AND LOVERS, a moody B&W version of the D.H. Lawrence novel) but otherwise hopping from genre to genre pretty arbitrarily, doing such drive-in fare as the disaster-flick-tinged AVALANCHE EXPRESS and a horror picture I've never seen called THE MUTATIONS that had the gimmick of casting real-life dwarves and deformed folk along with actors made up as plant-human hybrids. Tragically, CAMERAMAN doesn't address THE MUTATIONS - though the estimable Cardiff went back to being a hired-gun DP on material like RAMBO: FIRST BLOOD PART TWO and CONAN THE DESTROYER (look his complete resume up online and you'll see other late-nite-non-premium-cable junk that'll curl your toes) seemingly as happy as ever with the decidedly non D.H. Lawrence subject matter. He was still working shortly before his death just a few years ago.

Watching the "money shots" in CAMERAMAN, the bits from the Powell-Pressburger canon especially, as well as now-forgotten epics like THE BLACK ROSE, one is left marveling that such beauty and fluidity came out of yesteryear's bulky cine cameras the size of refrigerator-freezers. And the fact that this glorious Technicolor no longer exists in a 21st century of chintzy hand-held digital-video adds a layer of never-again poignancy. There may likely never be another Jack Cardiff. Now, when will we get more documentaries on active cinematographers? I’d guess Roger Deakins and Christopher Doyle would have lots to dish out, especially. 3 1/2 out of 4 stars.
Posted by Charles Cassady Jr. at 12:01 AM