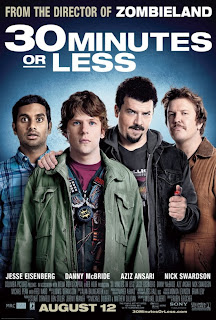 For about the first 30 minutes (or maybe a little less), 30 MINUTES OR LESS is a reasonably enjoyable high concept comedy. I wouldn't say the laughs come fast and furious, but there are enough to get by. There's also some degree of tension and suspense, and even though pizza delivery guy Nick (Jesse Eisenberg) doesn't make for an especially heroic main character, Eisenberg's own innate likability and vulnerability are enough to get us on his side. But balancing over the top comedy with a more serious violent crime plot ultimately proves too much for director Ruben Fleischer.

The setup is that while on a late-night delivery run, Nick gets ambushed and chloroformed by clueless losers Dwayne and Chet (Danny McBride and Nick Swardson). When he wakes up, Nick finds a bomb strapped to his chest and is told that either he robs a bank for the dunderheaded duo, or he goes boom. Once they get their money, Dwayne and Chet promise to remove the bomb and let Nick go. Having nowhere else to turn, Nick asks his only friend Chet (Aziz Ansari) for help. Despite being pissed off after just finding out that Nick had sex with his twin sister Kate (Dilshad Vadsaria), Chet agrees to act as his accomplice in the robbery.
As much as that sounds like a plot you'd only find in a movie, 30 MINUTES OR LESS was (loosely) inspired by actual events which ended in tragedy. Because of that, it has come in for criticism by some who believe it to be in poor taste. While I'm not entirely unsympathetic to that point of view, the fact is a great many movies and novels have used stories pulled from the headlines as inspiration. That's what fiction writers do; they take real events and people and lie about them in hopes of being rewarded with money. As long as no one is actually saying that the lies are the truth, I don't see the problem. Especially when sometimes the process of turning truth into lies results in something we'd be poorer without, like TO KILL A MOCKINGBIRD or PSYCHO. Sadly, this time the process of transforming truth into fiction has yielded something of considerably lesser quality.
For a comedy that seemingly wants to keep one foot planted in reality, 30 MINUTES OR LESS strains our suspension of disbelief too far too often. The script is just flat out sloppy, and very little that happens feels organic or as if it comes from the characters. Everything is dictated solely by the needs of the plot, even when it doesn't make any sense or is inconsistent with what we've seen before. For example, the only character in the movie who appears to have a conscience is Swardson's Travis. At one point he even betrays his partner when he thinks things are getting out of hand. And yet, when the movie reaches its climax, he completely flip-flops with no explanation. The laughs get fewer and farther between and the film's shortcomings become all the more obvious the longer it goes on. 2 out of 4 stars.
Posted by Bob Ignizio at 12:01 AM