[WHITE LIGHTNIN' is out now on home video.] 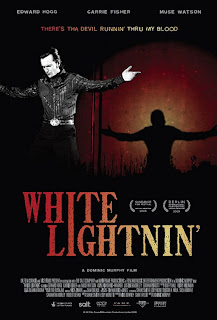 I know I saw DANCING OUTLAW somewhere, most likely courtesy of the lovingly remembered B-Ware Video & Books in Lakewood. They'd be the only walk-in store in town with the appetite to stock the cult-hit documentary. It's a nonfiction portrait of Jesco White, a folksy Appalachian "mountain dancer" who, for all his famous footwork in traditional rural choreography, also embodied the stereotypical pathology of the southern highlander (what we Yankees call "hillbillies"), namely poverty, drugs, alcohol, madness, violence, jailings, domestic discord and questionable anger-management techniques.


Jesco White offscreen even came to perform on some trendy Cleveland stages several years ago if I remember my history. Now comes WHITE LIGHTNIN', a dramatization and morbid exaggeration of White's pathologies. Amazing Fun Fact number one is that it was partially shot in Ohio, though mostly in Croatia (Eastern Europe does seem to portray boondocks USA in a lot of straight-to-video features) as befits the Amazing Fun Fact number two that this is a British production. Yes, WHITE LIGHTNIN' is generally what the Brits think of us Americans.

WHITE LIGHTNIN' claims to be "inspired" by the life of Jesco White. Shot in stark black-and-white that occasionally morphs to faintly muted color and punctuated by lo-fi music recordings and hellfire preacher sermons, were this movie factual we probably wouldn't have Jesco around anymore to be the subject of recent tribute tunes by Hank Williams III and Trailer Bride (White and his family saga got updated by producer Johnny Knoxville, of all people, in 2009's THE WILD AND WONDERFUL WHITES OF WEST VIRGINIA).

We first meet born-to-lose hapless protagonist Jesco as boy addict, getting stoned by inhaling gasoline and lighter fluid, plunging syringes into his veins or, when no controlled substances are available, getting buddies to semi-asphixiate him for the high. (Know what I was doing at this age? Homework. No documentaries made about me...). Jesco's father J.Ray, a famed dancer in traditional Appalachian footwork (think Riverdance, in a way), doesn't know much what to do besides chain the disappointing kid to the bed.

After reform schools and mental institutions the adult Jesco (Edward Hogg, from the rock semi-mockmentary BROTHERS OF THE HEAD) is diagnosed as looney but pretty much rejected by the system. He hooks up with some of the bandmates of his late father (mown down by a drunk driver) and begins a honky-tonk life on the circuit, performing the country dance styles he learned from the revered J.Ray. And he takes up cohabiting with the love of this life, a runaway wife (played by a very game Carrie Fisher) whom he nicknames "Priscilla," as in Mondo Elvis Presley. But repeatedly Jesco succumbs to the "bad thoughts," backsliding into the bottle or the needle and psychotic acts of revenge, which may or may not be gory delusions, that he perpetrates on his father's killer, Priscilla, or guys he assumes are hitting on Priscilla.

Director Dominic Murphy sometimes lays on the David Lynch sicko stuff pretty thick, especially in the finale of punishing self-mortification that makes one all the more glad for the quick cutaways and the B&W. The movie rides on Edward Hogg's live-wire lead as the sometimes charming but short-fused and doomed White, who asks for no sympathy but longs for God's forgiveness for his multitudinous sins and weaknesses that unleashes "there' devil in my blood" again and again. Still, I kind of prefer the documentaries over this pulp semi-fiction. A little of WHITE LIGHTNIN' goes a long way, as an amped-up hillbilly horror tale, jamming on rural US of A culture as a Bible-poundin', gun-totin', fight-startin', apostrophe-droppin' bunch of inbreds who make Amy Winehouse look like Sir Alistair Cooke. Quick, send in Her Majesty's SAS or Gerry and Sylvia Anderson's International Rescue Thunderbirds to perform an extraction. Before some DELIVERANCE types attack David and Victoria Beckham and their lovely family. And have some nice tea ready. (2 1/2 out of 4 stars)
Posted by Charles Cassady Jr. at 12:01 AM