We Get Letters: A Reader Responds to Our Review of 'Strongman' 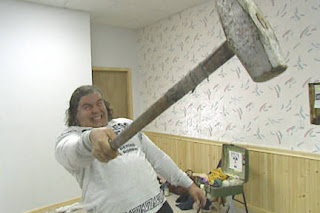 First, a note to anyone thinking about writing us. We will never reprint your emails without permission. Our sincere thanks to Mike Corlett for allowing us to share his message with our readers.

If you read Charles Cassady, Jr.'s review of STRONGMAN on this site., he expressed some suspicions that at least parts of the film had been staged. Mr. Corlett was kind enough to clear the issue up.

I read your review of Zach Levy’s STRONGMAN today. I am a “recent” (last 5 years) friend of Stan Pleskun, aka Stanless Steel. I met him at a Strongman Dinner (same organization featured in the middle of the movie) in 2005. Only I am a mild-mannered accountant, age 57, not exactly a strongman (but I have a  strong “grip”, learned that when I was in my mid-40s), but have become buddies with Stan. I wrote an article on him for a strength magazine shortly after the movie was first released.

Okay, my point…the movie was NOT scripted in any way, shape or form. As a matter of fact, Stan thought the movie was being made as a “feats of strength” movie and was surprised that it turned out to be “an arthouse film”. Sample Stan reaction: “Mike , why would someone want to watch a movie on my life? Don’t these people have lives of their own?” Most of it was filmed when Snooki was still an underage virgin. Well, maybe just underage…

But, not scripted at all. Zip. That is Stan.

I don’t represent the film in any way, just a friend  of Stan’s.

Something I learned as a result of this movie…wow, film critics copy each other’s reviews so much there is not much original work. Yours was NOT one of those!