The Robber (July 28th and 29th at the Cleveland Cinematheque)

[THE ROBBER screens Thursday July 28th at 7:50 pm and Friday July 29th at 5:30 pm at the Cleveland Cinematheque.]
Review by Bob Ignizio 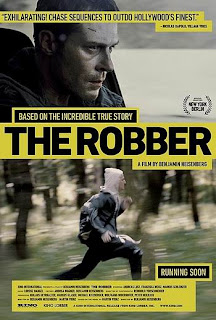 There is little in the way of thrills or excitement to be found in writer/director Benjamin Heisenberg's THE ROBBER (der Räuber). That's intentional, I think. Everything about the film, from its drab, washed-out color palette to the emotionally distant, understated performances of its lead actors seems calculated to take all the glamor out of crime. If that was the goal, then THE ROBBER achieves what it sets out to do. I'm just not so sure that makes for an interesting film.


Johann (Andreas Lust) is the criminal of the film's title. We first meet him in prison where he spends all his time training as a runner. Upon being released, Johann can't wait to run in a marathon, where he comes out of nowhere to win and set a new record. Running is one of the few things that seems to make this quiet and rather bland man feel alive. The other is committing armed bank robberies, which he also takes up again. Johann doesn't seem to care that much about the money; it's the rush he's after.
While going through the motions at a job placement agency, Johann bumps into Erika (Franziska Weisz), an old acquaintance of his. She offers to let him stay at her place until he finds one of his own, and before you know it the two become romantically involved. Love isn't the drug for Johann, though. Perhaps he does have feelings for Erika, but there's nothing in the performances here to suggest actual passion, even when the two make love.
That lack of passion, and in fact of any real emotion, is the root of my problem with this film. It's so detached from all of its characters that I found it difficult to care what happened to them. Johann doesn't have to be likeable, but he should at least be interesting. The fault isn't with Lust's performance, but with a script that gives us a central character who is essentially a blank slate. The same is more or less true of Weisz's Erika.
The film isn't completely without interest. I appreciate the serious, mature tone Heisenberg gives the proceedings. The look of the film may be drab, but the crime scenes are well staged and lift the film out of its doldrums somewhat, although I wasn't nearly as impressed as the critic whose blurb adorns the poster you see above. There are some other nice visual touches as well that have nothing to do with the action, in particular the film's final moments. During its climax, THE ROBBER finally seems to reach for some kind of emotional resonance, and it almost works. By this time, though, we've been kept at arm's length by the movie for so long that it's too little, too late. 2 1/2 out of 4 stars.
Posted by Bob Ignizio at 12:01 AM