Repost: Stake Land (opens July 29th for 1 week only at the Capitol Theatre) 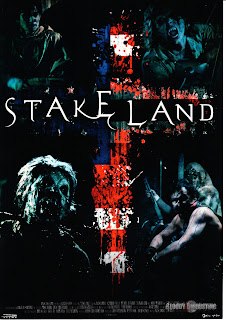 It seems like only last week I was lamenting how vampires can't be vampires in the movies anymore. Actually it was 2 weeks ago in my review of PRIEST. Thankfully STAKE LAND isn't anywhere near the kind of cinematic train wreck that film was. But I've got to call 'em like I see 'em, and as far as I'm concerned, the monsters in STAKE LAND are more like zombies than vampires. They're mindless, ugly walking corpses that feed on blood instead of brains. You still stake 'em in the heart (hence the film's name), although as long as you sever the spinal cord you're good, too. They don't take too well to sunlight, either, but that doesn't really come up much in the movie. Anyway, it's all in the way they crawl and shamble about. Zombies, I tell ya.
Anyway, on to the plot synopsis. Martin (Connor Paolo) witnessed his entire family being killed by vamps, but was saved by a vampire hunter known only as Mister (screenwriter Nick Damici). Now the two drive from town to town, avoiding the vamps when possible, killing them when necessary, while trying to reach the probably mythical safe haven of New Eden. Along the way the two pick up a few traveling companions: a nun (Kelly McGillis), a pregnant singer named Belle (Danielle Harris), and former soldier Willie (Sean Nelson). Complicating matters for the group, and even worse than the vampires, is a violent religious sect known as The Brotherhood, led by Jebedia (Michael Cerveris).
Of course STAKE LAND was influenced by George Romero's DEAD films, particularly DAWN OF THE DEAD. It also goes back farther to the novel and movies that inspired Romero: Richard Matheson's I AM LEGEND and it's first two film adaptations, THE LAST MAN ON EARTH and THE OMEGA MAN. And with Martin narrating the film while he and Mister drive around, at least the first few minutes feel a bit like ZOMBIELAND, only played serious. And with vampires... who act like zombies. At times it feels a bit like THE ROAD, too, especially when rumors of cannibalism at New Eden are mentioned. It never feels like Damici and director/co-writer Jim Mickle are just ripping off other films, though. The influences may be obvious, but STAKE LAND puts its own spin on the material and makes the pieces gel together into a cohesive whole.
STAKE LAND is a rarity in this day and age; an intelligent, adult horror film made on a medium budget and boasting strong performances and solid direction. There's a fair amount of gore and grue, but compared to most recent mainstream horror films that squeak by with an R, it's pretty tame. But make no mistake, the horror is there, and the scene where Martin's family is killed breaks at least one cinematic taboo that rarely gets broken. For all there is to recommend it, though, STAKE LAND is ultimately a well made, but minor film. Like many of the films released by Producer Larry Fessenden's Glass Eye Pix, I respect it more than I like it. 2 1/2 out of 4 stars.
Posted by Bob Ignizio at 12:01 AM