Page One: Inside the New York Times (opens in Cleveland July 8th exclusively at the Cedar Lee Theatre)

[PAGE ONE: INSIDE THE NEW YORK TIMES opens in Cleveland Friday July 8th exclusively at the Cedar Lee Theatre]
Review by Bob Ignizio 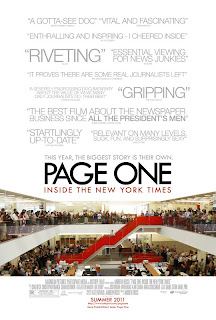 It's a bleak time for newspapers, with both readers and advertisers forsaking print media for the internet in large numbers. Some would say that's just the free market at work, and if the old model of journalism can't cut it anymore, then it should go by the wayside. Others would argue that many of the news websites online are merely collecting articles from the online versions of traditional newspapers and aggregating them in one easy to find place. If those papers went out of business, the websites would have a lot less content, and what would be left would be of dubious quality.


Director Andrew Rossi and his crew examine these issues PAGE ONE: INSIDE THE NEW YORK TIMES by spending what turns out to be a rather eventful year at he venerable newspaper. During the course of filming, the initial Wikileaks story comes out, NBC merges with Comcast, the Tribune company files for bankruptcy, The Times is forced to buy out the contracts of some of its employees, and the release of the Ipad seems to hold at least some promise of a new digital version of the paper. There's also discussion of some less than shining moments in recent New York Times history, like the Jayson Blair and Judith Miller scandals.
In particular, the film follows media reporter David Carr, a classic “seen it all” newspaperman if ever there was one, as he essentially documents what is either the death or drastic transformation of his chosen profession. We get to see the whole process of how a story gets into the paper, from initial ideas and sources through interviews and the often difficult task of getting subjects to go on the record, on through to battles with editors to get the best placement. Along the way, the point is made quite clearly that such a process isn't likely to happen with your average blogger working for little or no money and with no fact checking mechanism in place, even if they had the inclination.
By the end of the film, we have a pretty thorough understanding of the issues involved and what's at stake for the future of an informed society. What isn't clear is where this is all leading to, but that's hardly a fault of the filmmakers. No one else seems to have much of a clue, either. Obviously the possibility is there for professionally run newspapers to go all or mostly online, but the problem of how to pay for such endeavors remains. It isn't just hacktivists screaming “information wants to be free”: we're all used to getting a free lunch on the internet. While getting opinion pieces like movie reviews online is perfectly fine (in fact, we here at the Cleveland Movie Blog wholeheartedly recommend it), if we have to rely on bloggers for our hard news, we may well be screwed. 4 out of 4 stars.
Posted by Bob Ignizio at 12:01 AM