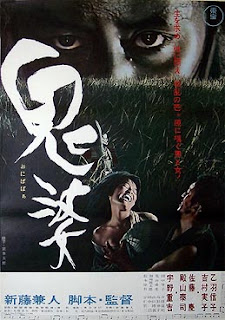 See these reeds? ONIBABA is like that, and more.
In the favorite of my many part-time jobs, I arrive at work adjacent to a stand of reeds, just over head-height, constantly undulating in the wind. I've stared at the ever-rustling fronds obsessively and even filmed them, probably because of my psychological scarring from early exposure to this 1964 samurai horror tale from director Kaneto Shindo.

I actually read about ONIBABA at length in writer Ivan Butler's brainy book Horror in the Cinema, which I perused obsessively as a lad (instead of the auto-repair manuals I should have been reading if I ever wanted gainful employment, reeds or no reeds by the parking lot). I didn't get to actually see ONIBABA until 1985 as part of my overseas London adventure. It was one of my first reviews done for a book publisher; pity I had to keep it about two or three sentences only, and it would be published in dubious Dutch translation. The movie is worth a lot more; I'd call it one of the great unsung horror pictures of all time.

The borderline-surreal setting is a largely reed-overgrown, marsh section of the Japanese countryside during the feudal era of civil war between two rival emperors. In the nonverbal opening we gather that two feral peasant women, the widowed mother of a soldier and her daughter-in-law, subsist by attacking wounded samurai lost in the reeds, killing them, stripping them of their valuables and throwing the corpses into an age-old gaping pit in the middle of the marsh (one overseas release edition of this was called THE HOLE; another was DEMON WOMAN).

Into this charnel routine stumbles Hachi, a fellow peasant who, along with the absent soldier, was forcibly conscripted into one imperial army, then another, before they went renegade together. The son was beaten to death in a farm village they were looting, Hachi cheerily tells the two grave women as he eats their food. Soon he is also ambushing and murdering any stricken samurai who pass through the reeds.

The mother fears, with justification, that her daughter-in-law will abandon her to cohabit with the rascally Hachi, and she fills the girl with fearful superstitious talk that demons and supernatural punishment could result from her disloyalty. When a fleeing samurai noble – significantly hiding his face behind a grinning demon mask - stumbles into the older woman's hut, she tries to take her scheme to a higher level, with unspeakable consequences and a horrific surprise ending that still can keep you up late, wide-eyed.

In the UK I looked up microfilm reviews of ONIBABA upon its release, and the Western critics generally damned Shindo’s picture as brutal trash. It is rough stuff for 1964, and upon seeing the Criterion Collection's edition I was surprised also at how sexy the picture is - maybe in Britain I saw an expurgated version; I think a friendless, lonely college guy like me v.1985 would have remembered the female characters going semi-nude all the time.

Really, this makes WOMAN OF THE DUNES look like an Amish romance, and part of the fascination (besides the sex) is how emotionally attached you become to unsavory characters who behave little better than predatory beasts, driven by elemental forces of lust, greed and hunger, yet who, in some odd way, come across as victims in a larger crime of warlord armies laying waste to the countryside. Without the two distant emperors at each others throats off somewhere, and their samurai minions shanghaiing innocents to do their fighting, these uncouth people would probably be humble farmers, not the monsters they’ve become, and in the end the transformation into an inhuman abomination (which may be the wrath of the Buddha or may have a rational physiological explanation) becomes breathtakingly literal.

This is practically a story that could happen among the cannibal family of Wes Craven’s THE HILLS HAVE EYES (and it’s kind of a wonder that the Craven of the ‘70s, who supposedly drew from Ingmar Bergman and other sources for his drive-in grue, didn’t decide to remake/Americanize ONIBABA, setting it during the Civil War perhaps. Then we’d be suffering through a schlocky remake of the remake today, I betchya). Probably one that would neglect the waving reeds, though. Repeatedly lensed in their perpetual snakelike writhing, this monoculture plant environment practically becomes a character itself. Ivan Butler was right, ONIBABA is one of the great masterworks of horror in the cinema, and I recommend you try to see it on the big screen. (4 out of 4 stars)