The Naked Island (July 29th and 30th at the Cleveland Cinematheque)

[THE NAKED ISLAND screens Friday July 29th at 7:20 pm and Saturday July 30th at 5:00 pm at the Cleveland Cinematheque.]
Review by Bob Ignizio 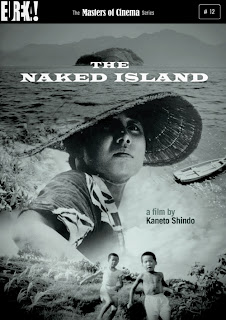 The family of four in director Kaneto Shindo's THE NAKED ISLAND spend almost the entire film without uttering a word. They don't have time for talk; they're too busy simply trying to survive. The father (Taiji Tonoyama) and mother (Nobuko Otowa) strain as they carry buckets of fresh water brought by canoe from the larger neighboring island up the steep hills to their garden. The two young boys (Shinji Tanaka and Masanori Horimoto) do their part, as well, doing what household chores they can manage. Meals and sleep provide the only respite. The older boy attends school, letting us know that the parents want their offspring to have a better life without it needing to be said.


The film covers a year in the family's life, and finally, about halfway through the film, the father speaks a single line. It happens during a rare moment of happiness as the family celebrates the boys catching a fish. They take their catch to the larger island to sell, and the money allows them a rare day of indulgences: they eat out, buy new clothes, and ride a cable car. For this day, at least, they are happy. But that happiness will be short lived.
This is a film about desperate people doing whatever it takes to survive, a theme also seen in Shindo's ONIBABA recently reviewed on this blog by Charles Cassady, Jr. We aren't given much reason to like or care about these characters, and in fact the father does a few things that strain our sympathy. In the end, though, we do care about them because we can relate to their struggle and their desire to see their children have something more.
The black and white cinematography here is as gorgeous as the existence it depicts is bleak. Shindo uses repetition of certain actions and musical motifs to depict the drudgery of life on the island in a way that's almost hypnotic. It's always striking to me when I see a film from the sound era that makes the artistic choice to be essentially a silent film just how effective pure visual storytelling can be, at least when you have a director like Shindo at the helm. There really is nothing more that could be said than what he shows us here. If you want to see that for yourself, don't miss your chance to see the film at the Cinematheque. At present, there is no US DVD release of THE NAKED ISLAND. 4 out of 4 stars.
Posted by Bob Ignizio at 12:01 AM