[THE MAN WHO FELL TO EARTH screens Friday July 29th at 9:15 pm and Saturday July 30th at 7 pm at the Cleveland Cinematheque.] 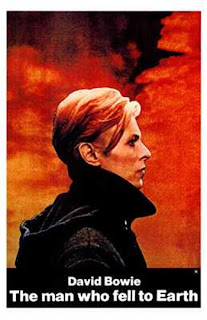 (This is a long, rambling review, but if you stick it out I will leave you with an unforgettable moviegoing image from my life, and who can offer you a deal like that?)

I learned of a notable death early this year. Cleve Matthews was a Journalism professor and faculty advisor of mine at Syracuse University back in the 1980s, and a reminder that I walked with interesting company prior to my Failure-to-Launch career as a relative nobody here in Nowheresville.

Among other achievements, Matthews originated the Public Radio news show "All Things Considered," and ultimately went to teach at the illustrious (a bit of sarcasm may creep in when I discuss it) S.I. Newhouse School of Public Communications, up there in the New York State college town. He was a very unpretentious fellow, what I knew of him, with a laid-back sort of Henry Fonda Midwestern vibe that suggested even an unassuming hick-town Ohioan like me could get ahead in the media without losing basic human decency. That gave me some hope. For a little while.

In the obituary photo in the alumni news, Prof. Matthews has a most unlikely Hemingway-style beard, making his age difficult for me to determine. Is that how he looked before or after my four-year acquaintance with him at Syracuse? I recall he also came along with a group of students, me included, for a 1985 sojourn at the Syracuse University London Centre in England. His wife was a photographer and had made some interesting black-and-white prints of a dance performance. `All things considered,' I don't think Prof. Matthews could number me as one of his more successful students, but I'm sure he would have been nice about it.

I'm sorry if these memories arise so fragmentarily and ill-considered. Kind of like college in general. But one of my campus memories, not directly concerning Cleve Matthews, is that of a screening of the cult science-fiction drama THE MAN WHO FELL TO EARTH, so I'll get on with that and just give a respectful nod to Matthews. Thanks, Professor, for trying to help with me. But in hindsight I should have changed my major to something pragmatic. There would be little future in Journalism.

And because I had a Film Minor (in other words, the formula to be doubly unemployable in Cleveland), I had to take some Syracuse University film courses as well. I saw MAN WHO FELL TO EARTH in one. The instructor, a fellow whose name, unlike Cleve Matthews’, I quite forget, gave the impression of someone who must have been a "colorful" type in the hippie daze. He had hand-picked a grab-bag of movies and George Orwell essays to prove his foggy thesis, about the "machine" of modern society chewing everyone up, and before long the whole class became a twice-weekly ordeal with an academic who had clearly spent too much time listening to himself talk. One of my fellow students had a shouting match with the instructor, such was the level of frustration and futility. But I grant the teacher this much: Screening this 1976 Nicholas Roeg picture was one of the better programming ideas, as far as illustrating his cosmology.

Wildly unlike the CGI-driven sci-fi comic-book stuff George Lucas would foist upon the world a year later, THE MAN WHO FELL TO EARTH has a genuine otherworldly ambiance and pacing, along with a soberingly pessimistic outlook. A space-alien movie for grownups, dig it, even with "stunt casting," most successful as it turned out, of music's David Bowie in the title role. Putting Bowie's "Space Oddity"/Ziggy Stardust image to excellent dramatic use, the picture presents him as "Thomas Jerome Newton," an unnaturally thin, cat-eyed man from a dying, red planet (Mars?), who travels to more or less present-day Earth with an idealistic plan to infiltrate Terran society to save his languishing family and drought-stricken home planet. In America Newton hooks up with a timid lawyer (Buck Henry) and, thanks to his alien technology, puts out a series of successful inventions (like a gimmicky instant camera - is that where Kodak EasyShare came from?) that in a few years makes their upstart company into a giant conglomerate, with Newton as its mysterious, Howard Hughes-like CEO.

Newton's plan is to ultimately finance his own private space program and mount an interplanetary rescue mission. But - again resembling Howard Hughes - things go tragically wrong, as the undercover alien succumbs to American consumer-culture values and temptations. Newton becomes addicted to TV, alcohol and luxury, starts a relationship with a floozy-ish woman (who gets the shock of her life when Newton reveals his true, non-sexy humanoid anatomy). Meanwhile an unfriendly Nixonian US government and rival industrial-espionage goons get involved to subvert the extraordinary visitor. "Get out of my mind!" Newton shouts, as his resolve falls victim to human vices, values and decadence.

It's not an easy film to grokk, some of it reflecting a narrative not as it is, but as Newton would want it to be, and some perfectly enigmatic stuff, such as when Newton's limousine apparently passes into a random time warp and briefly alarms a few Old West cowboys. Special effects are more impressionistic and rudimentary than gee-whiz. And the overall melancholia won't give a generation of filmgoers raised on TRANSFORMERS any adrenaline rush. But the results, even when inscrutable and typically Nicholas Roeg-ish, are still compelling.

How compelling? Here the film brought me one of my most memorable movie-watching (or Syracuse University) experiences ever. Remember, I eyeballed this feature in a somewhat surreal classroom setting. When MAN WHO FELL TO EARTH came up on the syllabus, one of my fellow scholars brought a buddy to the show - a Mohawk-haired punk in full Sid Vicious regalia. Know that he happened to sit right in front of me, in a tiered-amphitheater type of circular arrangement.

Our instructor, who may or may not have expected this apparition, was incredibly pleased about an actual punk sitting in on the picture. As he went through his usual spiel (commenting on the movie we’d seen at the last session, plus the George Orwell stuff) I noticed the punk writing intently. I had a clear view to see he wasn’t taking notes. He had no classroom-rules notebook paper but rather a copy of the tabloid-sized daily student newspaper out in front of him. And on the page, in blue ink-pen, he was quietly but fervently scrawling one word. The same word, over and over again, in jagged letters:

…I am not absolutely positive, but I think he continued this after the lights went down and the movie started. I think the only other reaction out of him was during the "Get out of my mind!" line; the punk sort of chuckled or snorted in approval.

I do believe he took the newspaper with him afterwards. Otherwise I hope I might have had the foresight to keep it and preserve it, scan a JPEG and present it here, to show you all that this happened, and I was there. So, I guess the moral is that MAN WHO FELL TO EARTH, with all its unsettling ambiguities, certainly spoke to the soul of this young fellow, and it may to you as well.

Wonder what that punk is doing now? Leading his local Tea Party Republicans? Typing “KILL KILL KILL…” on a shiny new iPad? Or getting awarded a nice, high-paying job over me at a Cleveland media outlet, probably NPR, where his Mohawk and attitude are welcome as part of the office “diversity” policy?