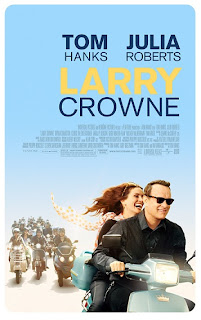 I'm sure Tom Hanks means well with LARRY CROWNE, his second feature film as a director. He's Hollywood's Mr. Nice Guy, and it's clear that he set out to make a nice movie, perhaps one he hoped might go beyond nice to inspiring and uplifting. Nothing wrong with that, and as Hanks has proven many times before, there's a sizable audience for his brand of nice. That audience deserves better than LARRY CROWNE.
In addition to starring in the lead role and directing, Hanks also co-wrote the screenplay with MY BIG FAT GREEK WEDDING's Nia Vardalos, and that's where the root of the movie's problems lie. There isn't a single character or situation in the film that rings true, and the dialogue is about on par with a mediocre television sitcom.


Navy veteran and 9 time “U-Mart” employee of the month Larry Crowne is yet another quirky underdog role for Hanks. Larry has Forrest Gump's unyielding optimism and sexless man-boy demeanor, but unlike Gump possesses an IQ that's at least in the normal range. The extra brain power comes in handy when Larry signs up for some classes at the local community college after being downsized at his job for not having a degree.
One of those classes is a speech course taught by Mrs. Tainot (Julia Roberts) whose lack of passion for the job, alcoholism, and cranky personality all but obliterate Roberts' usual screen charm. The script tries to pile most if not all of the blame for this on her husband (Bryan Cranston), an writer who hasn't had a book published in some time. He claims he's breaking into “new media”, although whether he's really foolish enough to believe he's going to strike it rich by blogging or just thinks his wife is stuipid enough to believe him is unclear. Regardless, he doesn't get much blogging done since he's too busy looking at internet porn the equivalent of fifties pin-ups or a Sport's Illustrated swimsuit issue. No, he's not “husband of the year” material, but Roberts' character is no prize, either.
After ditching his gas guzzling truck for a scooter to save gas on his commutes to school, Larry meets the cute, free-spirited fellow scooter rider Talia (Gugu Mbatha-Raw). She makes Larry her pet project, encouraging him to join her “gang” of scooter riders, giving him wardrobe advice, and eventually trying to hook him up with Mrs. Tainot. Not that we ever get the sense that Hanks and Roberts have any chemistry whatsoever, or even remotely have the hots for each other. It's simply required by movie law that these two must get together.
Despite all the forced quirkiness, LARY CROWNE is a pretty bland film. There are a few chuckles scattered throughout, but hardly enough to recommend it. And while I don't think it was intentional considering what a card-carrying liberal Tom Hanks is, the film kind of sends the message that losing one's job and house is at worst a minor bump in the road. Hardly the sort of theme that's going to resonate during a recession. 2 out of 4 stars.
Posted by Bob Ignizio at 12:01 AM