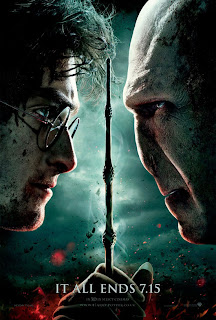 After the cluttered and clunky HARRY POTTER AND THE DEATHLY HALLOWS PART 1, I wasn't holding out much hope that the second installment would be much better. Fortunately my expectations proved to be wrong. HARRY POTTER AND THE DEATHLY HALLOWS PART 2 is a much more streamlined, and much more enjoyable film. Sure, there were still characters that I didn't know and plot points I wasn't clear on, but this time around director David Yates doesn't get nearly as bogged down in the minutiae.
Harry (Daniel Radcliffe) and his best friends Ron (Rupert Grint) and Hermione (Emma Watson) are still on the run from Lord Voldemort (Ralph Fiennes). But Harry hasn't simply been running. He's been inflicting considerable damage on his nemesis by destroying little bits of Voldemort's soul called horcruxes that have been hidden in various objects. The rest of the staff and students at Hogwarts prepare to do battle with Voldemort's army of evil wizards so they can buy Harry enough time to destroy the last few remaining soul nuggets and finally face off against Voldemort mano a mano.
Characters die, some others come back (one in particular sporting the dead guy outfit of choice, a white robe) and many surprising secrets are revealed that help tie up the loose ends of the series. Throughout it all, though, the focus stays squarely on the central trio of heroes and, for the first time in the series, their foe Voldemort. Finally we get to see Fiennes dish out some hands-on villainy and really establish himself as a threat.
The main problem with this series, especially since Yates took over in 2007 with HARRY POTTER AND THE ORDER OF THE PHOENIX, has been that it caters far to much to fans of the books. At times it feels like the movies assume everyone in the audience knows things that aren't up on the screen. At other times it feels like the filmmakers have tried to cram every possible subplot and minor character into the script even when doing so makes for a film that has no flow.
I think if someone had actually decided to do the hard work of making a true adaptation, one that recognizes that the movie is not the book and certain things have to be cut out and changed, everything could have been wrapped up in one two and a half hour movie. That said, at least most of the annoying stuff was in the first part, so this one can just get down to the business of being an entertaining fantasy/action flick. It's by no means in the same league as RETURN OF THE KING, but HARRY POTTER AND THE DEATHLY HALLOWS PART 2 is a satisfying conclusion to the series whether you're a diehard fan or a more casual viewer like me.
As for the 3D, this is a pretty good post-production conversion, but still nothing to write home about. The series has gotten by just fine in 2D up til now, so unless you're really a big fan of the gimmick, save yourself the extra couple of dollars. 3 out of 4 stars.
Posted by Bob Ignizio at 12:01 AM