Enter the Dragon (July 16 at the Capitol Theater) 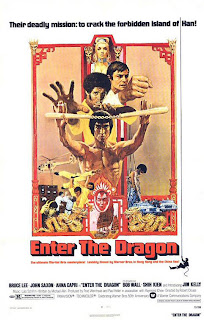 [ENTER THE DRAGON screens July 16 at midnight at the Capitol Theater.]


I was about 10 years old when Bruce Lee died, and my dawning awareness of the media and mushrooming adolescent interest in movies (why didn't I just stick with dinosaurs, dammit? Probably would have a better job by now) coincided with Bruce Lee-mania at its height. Bruce Lee imitators at the drive-ins, Bruce Lee imagery in comics, and the wide release of ENTER THE DRAGON - a breakthrough as a joint US-Hong Kong big-budget martial-arts extravaganza, filmed in English, its repute only enhanced by the sudden death of star Bruce Lee immediately before its blockbuster debut. Bruce Lee was all over the early 1970s mediascape, rivaled I think only by Nixon and THE EXORCIST and the Manson Family. Even when I got my first apartment on the west side of Cleveland (why didn't I just continue to live with my parents, dammit? Could have saved up some money for the lean times now) I'd see an old Bruce Lee poster up in some storefront and get a twinge of adolescent nostalgia.


I finally got around to experiencing ENTER THE DRAGON, the martial-arts
trendsetter that was the last movie Lee completed in full, after already having enjoyed seeing many of its cliches thoroughly trashed in the "Fistful of Yen" segment of the cult classic THE KENTUCKY FRIED MOVIE. So maybe the DRAGON was ruined for me by satire, or maybe I just knew a pretty standard B-movie plot, with a music score right out of '70s TV cop shows. Lee plays "Lee," a peerless master/teacher of personal combat at the Shaolin Temple. He is approached by an international crime-busting agency to help bring down an elusive crime lord called Han - himself a Shaolin disciple gone bad. Han runs his drug/prostitution/slavery empire from a private island stronghold where guns are forbidden. Instead the supevillain recruits world-class martial artists as his guards and enforcers.

Lee goes to the island on the pretext of competing in Han's tournaments, but in fact he's to make contact with an agent already there undercover. There are also personal reasons at stake: Lee wants to avenge the honor of the Shaolin Temple AND avenge his sister - who died by her own hand to escape being manhandled at the hands of Han's handyman. Sometimes I am such a good writer it scares me.

To appeal to the most racially diverse audience in both the US, Far East and Third World markets, the producers backed Bruce Lee up with two supporting good-guy fighters (said to be Vietnam War comrades), a white guy (John Saxon) and a black soul brother (Jim Kelly, a Black Power flag in the background of his scenes) on the run from racist cops, and it makes an interesting commentary that these two are allowed to show sexual interest in Han's many harem girls, while Lee remains monkish and Zen-focused on the mission. Oh, well, nobody should expect ENTER THE DRAGON to be much more than a quasi-007 ripoff, an excuse for the fight scenes at which Bruce Lee and other actor-athletes here excel. The movie earned a solid place in the hearts of action-fans of all ages, and Lee's long, final duel with Han is a classic. Even with its silly, dated and schlocky elements, there's something so straightforward about how ENTER THE DRAGON delivers the goods that it even earned respect from the western critics who automatically condemned any kung-fu movie as trash (at least before CROUCHING TIGER, HIDDEN DRAGON came along).

Sadly, we'll never know how much earlier Asian action tales would have been embraced had Lee survived to make bigger and better movies than this. Try to catch it on a widescreen edition to best appreciate the mayhem.
Posted by Charles Cassady Jr. at 12:01 AM