[DAVID AND LISA screens Saturday July 16th at 5:30 pm at the Cleveland Cinematheque. Star Keir Dullea will be present to answer questions after the screening.] 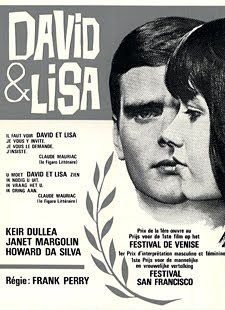 I was just told by a police officer that the community into which we moved has a surprisingly out-of-proportion number of mental cases in the local population. Yes, I know what your thinking (and I'm not even a crazoid imagining I can read minds). You're wondering which parcel of Greater Cleveland I'm talking about that's overrun with closet nutzos. Such statistics sure don't show up in Cleveland Magazine's "Rating the Suburbs" issue, oh no. Well...find me a decent job with benefits, and you'll find out what community this is. It'll be right there on my paycheck.


Which brings me to DAVID & LISA. Yes, all the kids these days idolize Edward and Bella, but for a previous generation of young people, now old like me, bitter, laid off and in the process of losing our homes to the banks, the tragically romantic young lovers on the edge of reality were David and Lisa, of this 1962 drama (based on the Dr. Theodore Isaac Rubin novella Lisa and David). Director Frank Perry's best-known feature, once you strike the camp classic MOMMY DEAREST off the roster, it was considered most un-Hollywoodlike and progressive in its portrayal of mental illness (and yet the dude would go on to do MOMMY DEAREST, damn showbiz).

The setting is a mental ward for unmanageable young people. Lisa (Janet Margolin) is an adolescent schizophrenic, infantile despite her years, who speaks in rhyming, often nonsensical word streams. David (Keir Dullea) is an older teenager who takes an interest in Lisa's case. He seems brilliant and practically on a level with the psychiatric staff himself - until someone touches David on the arm and he throws a violent fit, proving himself similarly screwed up and antisocial. Only the unstable Lisa seems to stir something like compassion in him. Under the patient, wise guidance of a humane doctor (actor Howard da Silva, a victim of the Hollywood blacklist who deserved much better out of his career), David makes slow but visible progress in forming normal relationships and attachments, Lisa and her pathologies bringing out his better nature.

Though the script (one of numerous collaborations between Frank Perry and his wife Eleanor) treads lightly over the book's suggestion that David is struggling with being a closet homosexual, allowing some hope (and an understated, then-daring depiction of Lisa's dawning sexuality) that the pair will form a healing bond, perhaps for life - though all that the Perrys allow to happen is that David, via Lisa, overcomes his morbid phobia of being touched. An especially exquisite moment happens in an art museum in which Lisa responds to an avant-garde sculpture in a way that makes the best advert modern art ever had. This is a sensitive and intelligent picture, and in terms of pleading for understanding of troubled youth, delivers on its terms just as much as the better known REBEL WITHOUT A CAUSE.

Actor Dullea, originally from Cleveland, will host this revival screening at the Cinematheque in person. And I must wonder if he knows the psycho-ridden community I'm now living in. (3 1/2 out of 4 stars)
Posted by Charles Cassady Jr. at 12:01 AM