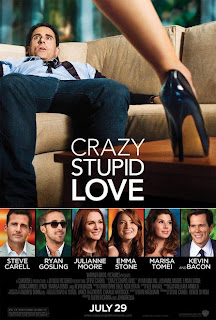 There is very little wrong with most new Hollywood movies that couldn’t be cured by some judicious editing. That’s the case with CRAZY, STUPID, LOVE., a romantic comedy-drama that has many virtues – apart from its eccentric title punctuation – but is undermined by reckless excess. Though it clocks in at a shade under two hours, the movie, starring Steve Carell as a recently divorced man, feels like a long, meandering trip interrupted by a few random and unpleasant surprises.

Directed by the duo of Glenn Ficarra and John Requa, the movie has a prestigious look, with stylish cinematography by Andrew Dunn (despite its inexplicable fascination with people’s shoes) and a stellar cast that includes Julianne Moore, Kevin Bacon, Ryan Gosling and Emma Stone. But these qualities are compromised by Dan Fogelman’s uneven, overambitious script, which is equally capable of sensitive wit and eye-rolling banality. The movie tries to tell too many stories – enough, in fact, to compose an entire TV season — with jarring shifts of tone and surprising lapses of coherence and taste. Toward the end, an attempt is made to tie the disparate threads together with a clumsy revelation, followed by that most desperate of all movie tropes – a big, knock-down brawl involving all the major characters. (It was this segment, sadly, that provoked the loudest laughter from the audience.) Given the promise of quality established in the opening scenes, the movie’s descent into banality is disappointing.


The central story is about the breakup of the 25-year marriage of high school sweethearts Cal and Emily Weaver (Carell and Moore). When Emily confesses that she has slept with a co-worker and wants a divorce, Cal’s response is stony silence, followed by a sudden leap from the couple’s moving Volvo. Cal departs the family home, leaving behind his confused children and moving into a bachelor pad. He spends his nights drinking at a cocktail lounge that seems to have been teleported from an earlier, swinging decade. Cal sits at the bar sipping his vodka and cranberry cocktails and loudly lamenting his wife’s perfidy.


Cal’s pathetic display catches the attention of Jacob (Gosling), a slick young roué (also imported from another era). Jacob offers to take Cal under his wing and show him the manly art of seducing women (shades of HITCH, THE PICKUP ARTIST and even the Carell-starring 40 YEAR OLD VIRGIN). Jacob tosses Cal’s New Balance sneakers (“Are you in a fraternity?”) over a railing and outfits him in a trendy new wardrobe. He instructs Cal to watch and learn as Jacob seduces a different comely lady every night, using lines and techniques that would get him laughed out of any real singles’ bar.


Cal proves a willing pupil, stumbling his way into a night of passion with a sexy teacher (Marisa Tomei). The floodgates open, and Cal becomes an avid womanizer (one wonders when he has time for his kids and job), and in his selfish pursuit of sexual conquests, loses what mild sympathy we had for him. At the same time, Cal wants desperately to get back together with Emily, whose one degree of separation from Kevin Bacon, as the co-worker she cheated with, is proving less interesting than expected. (Furthermore, Bacon is too much the movie star to convince as a nerdy accountant; maybe he should have swapped parts with Carell.)


When the movie promises to be about the education of a pickup artist, it’s fairly entertaining, chiefly because of Gosling’s amusing portrayal of a minor-league Hugh Hefner. But the movie wants to be too many things – a bittersweet divorce drama, a young adult love story (when Jacob unexpectedly falls in love with a young woman played by Emma Stone), an adolescent love story (when Cal’s 13-year-old son pursues an obsessive crush on the family babysitter, who in turn has an unhealthy crush on Cal). A separate storyline involving recent law school graduate Hannah (Stone) and her romantic travails seems completely irrelevant, until the last act, where it’s tied in by way of an unconvincing coincidence, one of several in the movie.


It is as if, rather than two directors, the movie had two writers (if both housed in the person of Fogelman). Alongside many scenes of wit, taste and sensitivity (the jokey, affectionate conversations between Cal and Emily, the friendly intimacy between Hannah and Jacob), there are questionable lapses, such as young Robbie’s middle-school grade graduation speech — a rambling and irrelevant lament about how love stinks — and an inappropriate “graduation gift” he receives from babysitter Jessica (Analeigh Tipton) that the movie presents as cute, but that would in real life get her arrested for corrupting a minor. 2 1/2 out of 4 stars.
Posted by Pamela Zoslov at 12:01 AM