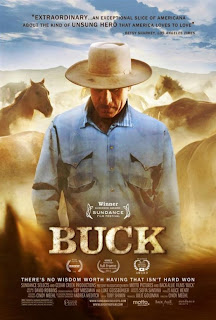 If you want to go see a genuinely uplifting, inspirational film this weekend, don't look to Hollywood. Instead, check out the indie documentary BUCK. The film follows horse trainer Buck Brannaman on his travels across the country, giving horse training clinics in which he proves that gentleness and understanding will produce better results than more traditional methods in which a horse is “broken”. Any skepticism those attending Buck's clinics might have quickly evaporates when he takes problem horses and soon has them following him around and obeying commands like puppy dogs.


As you might have guessed, Buck was the inspiration for the novel THE HORSE WHISPERER. He also served as a consultant on the film adaptation, and director and star Robert Redford gives Buck considerable credit for his behind the scenes work. And even though he's on the road a lot, he still maintains a close relationship with his wife and daughter.
That Buck is such a gentle, well adjusted and successful person, we soon learn, is close to a miracle. Both Buck and his brother were forced into show business as “trick ropers” as children by their abusive father. Their mother shielded the boys somewhat, but after her death things quickly went downhill. Eventually the kids were saved by foster care, and against the odds Buck managed to not only break the cycle of abuse, but using what he had learned from that dark period of his life to become a better person and a better horse trainer.
There's nothing about Buck Brannaman that seems flashy or false, and the same can be said about this film. But what could be a better antidote to action movie fatigue than a film extolling the virutes of kindness and non-violence in a manner devoid of preachiness? The kids might grumble about being dragged to see this instead of the latest mind-numbing TRANSFORMERS sequel, but once they settle down to watch, I bet most of them will grudgingly find themselves involved. The film is rated PG, which seems about right to me. It should be noted that there's one potentially scary scene for little ones in which a problem horse bites a human, but I'd still say take the whole family. 3 out of 4 stars.
Posted by Bob Ignizio at 12:01 AM