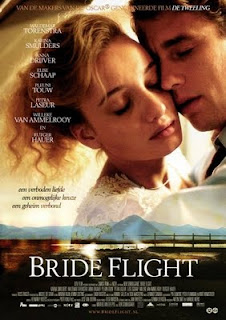 In the present we see aged winemaker Frank (Rutger Hauer) tasting his latest batch. It meets with his approval, and he drives off only to suffer a fatal heart attack moments later. Next we see three older women being notified of Frank's passing: Ada (Pleuni Touw), Marjorie (Petra Laseur) and Esther (Willeke van Ammelrooy) all make plans to attend his funeral regardless of any hardships doing so may create. All three knew Frank once upon a time, and their memories take us back to 1953 when they were passengers in a transcontinental air race from London to New Zealand. Fleeing from the still lingering ravages of World War II at home, the women all have fiancés waiting for them when they land.


In the flashback sequences, Ada (Karina Smulders) is naïve and devoutly religious, but with an independent streak just waiting to show itself. The flirtatious Esther (Anna Drijver) is the only member of her family to have survived the Holocaust and is running from her Jewish faith. Marjorie (Elise Schaap) comes from a good family, and of the three seems the happiest and most excited about embarking on her new life. Of course tragedy is just around the corner for her. Also on board the plane is young hunk Frank (Waldemar Torenstra), who immediately takes a shine to Ada and will eventually become involved in the lives of all three women in different ways.
BRIDE FLIGHT is the cinematic equivalent of a fun, easy on the brain summer novel. Maybe something by Harold Robbins or Jackie Collins, but with just a touch more class. Or maybe it's just the subtitles that make it seem classier. Either way, it's not what I'd call great cinema. However, if you're in the market for a romantic melodrama with an attractive cast, some nice scenery, and just enough spice to keep things interesting, this should do the trick. 2 1/2 out of 4 stars.
Posted by Bob Ignizio at 12:01 AM