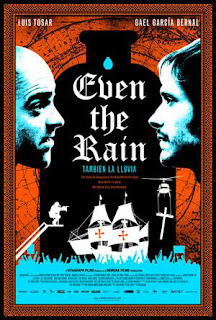 We're just a little over halfway through the year in movies, which means it's about time for most critics to start complaining about what a rotten year in cinema it's shaping up to be. I'm not going to be one of those critics.
For starters, one of the benefits of living in a city that Hollywood doesn't deem to be important like New York City, Los Angeles or Chicago is that a lot of the good movies that opened in those cities at the end of 2010 didn't hit my town until January or February of this year. That helps ease the pain of having to sit through the dregs Hollywood dumps on audiences in those lean months. And since I had no way of seeing those movies until 2011, as far as I'm concerned that's when they came out.
Also, Cleveland is extremely fortunate to have The Cleveland Cinematheque, the film series at the Cleveland Museum of Art, and the Cedar Lee Theatre, not to mention the Cleveland International Film Festival and the Cleveland Independent Film Festival early in the year. Even in the worst of cinematic times Clevelanders usually have something worth watching up on the big screen.
And even as bad as Hollywood's offerings during the first half of the year tend to be, there were still a few mainstream escapist movies that I enjoyed just as much as the indie films, documentaries, and foreign language flicks. So without further ado, here are my top 10 movies for the year so far, followed by my top 5 documentaries for the same period.

5. Page One: Inside the New York Times

3. Enemies of the People

1. Nostalgia For the Light
Posted by Bob Ignizio at 12:01 AM