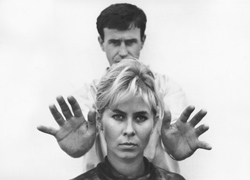 A shirtless man has his hands tied behind his back. He leans forward and falls, as if he has just been shot. But it's nothing quite as serious as that. This is some kind of weird game being played by four young men, each trying in turn to grasp a box of matches in his mouth. The winner is to get the money inside a piggy bank. Most of the players promise to spread the wealth around, but the unnamed man who will become our main character wants it all for himself. You don't need to know that this film was made in Communist Poland in the sixties to get the symbolism.


The film doesn't follow a traditional plot, moving instead from one odd, at times almost random scenario to the next. The unnamed protagonist (Jan Nowicki) is looking to make his way in the world on his own and get married. He doesn't have a fiancee, but he solves that problem when he meets a female street car driver ( Joanna Szczerbic) and decides to introduce her to his friends and family as his bride to be. The two share some genuine moments and seem to have a connection, but can't quite seem to come together.
BARRIER (Bariera) is exactly the kind of film you'd envision if someone told you you were about to see an art film made in the sixties by a young Polish filmmaker who had been heavily influenced by the French New Wave. Director Jerzy Skolimowski has a great eye for shot composition, and stages some great set pieces like the opening scene and the protagonist's visit to a rooming house with antlers all over the walls. Skolimowski doesn't quite achieve the mysterious romanticism of Renais or the biting surrealist satire of Bunuel, nor does he take a hard political stance like Godard. But what Skolimowski offers in his film that is often lacking in the works of those directors is a down to earth humanity beneath its arthouse veneer.
Both Nowicki and Szczerbic turn in performances that imbue their characters with such lightness and vitality that at times you almost forget the film's artifice. And while BARRIER addresses such weighty issues as politics and religion, it always maintains enough of a sense of humor and playfulness to keep the pretension to a minimum.
BARRIER perhaps seems a bit dated and overly affected from this vantage point in time, and even at the time of its release would probably have been more of a promising sign of things to come than the work of a fully mature director. That promise would be borne out by such acclaimed later works by Skolimowski as DEEP END, MOONLIGHTING, the cult sci-fi film THE SHOUT, and even last year's POW on the run film ESSENTIAL KILLING. Still, this early work is not without interest, especially for fans of sixties arthouse cinema. It's not available on home video in the US, so if this sounds like your kind of movie don't miss this rare chance to see it at the Cleveland Cinematheque. 2 1/2 out of 4 stars.
Posted by Bob Ignizio at 12:01 AM