Ayn Rand: A Sense of Life (July 7th and 9th at the Cleveland Cinematheque)

AYN RAND: A SENSE OF LIFE screens Thursday July 7th at 5:30 p.m. and Saturday July 9th at 9 p.m. at the Cleveland Cinematheque] 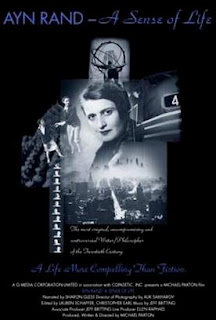 I said a cute thing at my part-time subsistence library job (any questions why LeBron left Cleveland?). I had found an Ayn Rand book misshelved. But I told the head librarian I should just leave it there. Under Rand's own "Objectivist" philosophy, the book rightly ought to take responsibility for filing itself in proper order and stop being a problem for me and my rugged individualism. Canned laughter should go here.


AYN RAND: A SENSE OF LIFE is a 1997 documentary feature, narrated by actress Sharon Gless, about Rand, whose writings, typically assigned nowadays in high schools (Ayn Rand, not Sharon Gless), have led generations of SOB ex-boyfriends, and a few ex-girlfriends I bet I can name, to use her lofty principles as an excuse for intellectualizing their behaving like selfish a-holes. Full disclosure: I haven't read a word of Ayn Rand's, not yet. I get accused of enough awful stuff already.

Originally an emigre from St. Petersburg in Soviet Russia to the US, Rand (1905-1982) used novels like Anthem and Atlas Shrugged to promote her "Objectivism," a worldview that championed individuality, self-interest, unfettered capitalism and (naturally) deplored Marx and communism - this back when the latter were all the rage amongst intellectuals (possibly even more so than they are today on college campuses). While the political Right Wing enjoyed Rand's excoriations of the USSR and its handmaidens, filmmaker Michael Paxton is careful to include the author/thinker trashing not just leftists but American conservatives as well, for the latter's upholding the religious faith that the atheistic, rationalist-materialist Rand rejected long ago.

The young Ayn earned income in the USA as a movie extra (in C.B. DeMille silent Bible epics, ironically) and screenwriter. In this telling the tangential presence of Hollywood dish and celebrities sometimes threaten to overwhelm the rest of the heavy philosophical stuff. Still, it's fun to hear gossip that Frank Lloyd Wright was asked to design fictitious skyscrapers for the stolid 1949 Hollywood adaptation of a Rand classic, THE FOUNTAINHEAD starring Gary Cooper and Patricia Neal. Wright lost the commission when he demanded creative control over the entire picture (which was pretty damned Objectivist of him, if you ask me. Maybe we shared the same sense of humor; he just didn't work in a suburban Cleveland library).

On a similar note, though, none of Rand's detractors or philosophical opponents get to voice their opinions in AYN RAND: A SENSE OF LIFE, and the more sordid aspects of her personal life and relationships are papered right over. For that I recommend Helen Mirren as a randy Rand wrecking her disciples' marriage in the 1999 Showtime biopic THE PASSION OF AYN RAND. Overall, however, this nonfiction treatment is surprisingly nimble, even with such a weighty subject, epic running time, and an unrelentingly-worshipful tone worthy of a cult-recruitment video. The picture was nominated for a Best Documentary Feature Oscar. But it didn't win, so, as an Objectivist might say, screw it. (3 out of 4 stars)
Posted by Charles Cassady Jr. at 12:01 AM