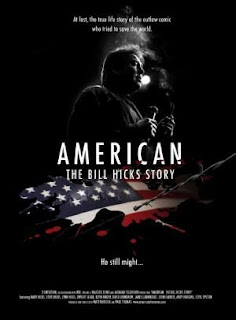 Bill Hicks was not your typical stand-up comedian. His act wasn't just about telling jokes and making people laugh, although he certainly did that. He also had a philosophy and a message to his humor, and a desire to make people see through the illusions and distractions those in power use to keep us docile and ignorant. His attitude was a mix of the misanthropic and the optimistic, and he wasn't afraid to make his audience angry. Bill could usually get an angry crowd back on his side with a well timed “purple veined dick joke”, but if he didn't, that was ok, too.
AMERICAN: THE BILL HICKS STORY covers just about every aspect of the late comedian's life. For Bill's childhood and early years, the film uses interviews with friends and family as the audio backdrop to finely realized animated segments. It's a visually arresting approach that keeps this portion of the story, for which there isn't much video footage, moving along in a cinematic manner rather than getting bogged down with still photos and talking heads. The video footage that is available, however, will be a real treat for Hicks fans. It shows the comedian performing as a teenager. He hasn't found his voice yet, but he's surprisingly confident (and funny) for someone so young.
The animated segments are used less once the film moves into the relatively short main phase of Bill's career, which lasted from 1987 until his death from pancreatic cancer in 1994. There's certainly enough of Bill doing stand-up in his prime here for those who aren't familiar with his routine to get a sense of what he was like, but this is not one of those movies where it's just one clip after another with little substance. AMERICAN kind of assumes you've heard Hicks' comedy and genuinely want to know more about the man and how he went from being a gifted young kid emulating Woody Allen to one of the most unique and influential comedy voices of the last 25 years.
Despite being produced with the full cooperation of the Hicks family, AMERICAN never feels like a sanitized version of Bill's story. This is particluarly true of the way the film handles Bill's drug and alcohol use. Bill had some definite substance abuse problems that he had to overcome, but in the spirit of Hicks' own philosophy, the positive aspects of his drug use are mentioned as well. This is especially true of psychedelic mushrooms, whose responsible use Bill often extolled in his routines even after he had been completely sober for a number of years.
There are of course omissions, and things one wishes had been expanded on in more detail. The DVD and Blu-Ray of this film would seem to include enough bonus features to make up for this, although having watched the film on Netflix instant view I can't say for sure. Even on its own, though, there's more than enough here to serve as a great introduction to and overview of Bill's life and career. On top of that, there's also a great deal of rare footage and insightful interviews that go deep enough to satisfy even hardcore Hicks fanatics. 4 out of 4 stars.
Posted by Bob Ignizio at 12:01 AM