[2001: A SPACE ODYSSEY screens Saturday July 16th and Sunday July 17th at the Cleveland Cinematheque. Star Keir Dullea will be on hand at the July 17th screening to answer questions from the audience.] 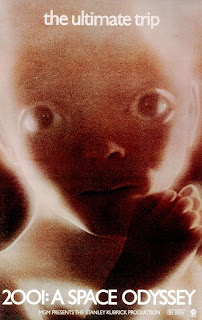 There was a time when a sizable number of moviegoers actually wanted to see films that made them think, perhaps challenged them, even. It was in such a climate that Stanley Kubrick released his 1968 science fiction classic 2001: A SPACE ODYSSEY. Audiences and critics were divided, but everyone talked about it. And there were actually things in the movie to talk about. Big ideas about where the human race was headed, where we had been, and the forces that shaped us on that journey – God, evolution, benevolent space aliens; take your pick.
2001 begins at “The Dawn of Man”, where we see our ape-like ancestors take a leap forward in evolution after encountering a strange monolith. Using one of the most iconic transitions in cinema, the movie then leaps ahead to a space age future where another monolith has been discovered on earth's moon emitting a radio signal that points to Jupiter. Astronauts Dave Bowman (Keir Dullea) and Frank Poole (Gary Lockwood) set off in a spaceship to investigate, assisted by the artificial intelligence HAL 9000 (voiced by Douglas Rain). But something goes wrong with HAL along the way, and it becomes a battle between man and his computerized creation to see which is better suited to survive and go forward with the mission, and by extension take the next step in evolution..
The special effects still look better than anything that can be done today with computer animation. You will not once be pulled out of the movie because something looks fake. Dullea and Lockwood both give solid performances, and Rain makes HAL seem almost human. As for the film's central theme, it's just as relevant today as when the film was released: do we as a race have what it takes to move forward to the next level, or will our capacity to create new technologies outpace our ability to use them properly? Kubrick's film was optimistic. It wasn't going to be easy, but human beings would continue to progress and evolve. Looking at the world today, it sometimes seems more like Akron rock band Devo's “theory of de-evolution” is wining out, but here's hoping Kubrick was right. 4 out of 4 stars.
Posted by Bob Ignizio at 12:01 AM