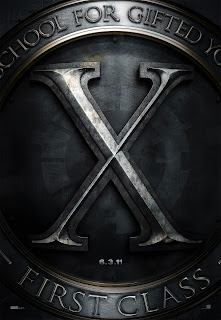 The focus of X-MEN: FIRST CLASS is primarily on exploring the past of 3 characters we know from the other X-MEN films: Professor Charles Xavier (James MacAvoy), Erik “Magneto” Lensherr (Michael Fassbender) and Raven aka “Mystique” (Jeniffer Lawrence). Only this time around, they're all on the same side, more or less.
As depicted in 2000's X-MEN, Erik discovered his powers as a prisoner in a Nazi concentration camp in 1944. FIRST CLASS restages that scene and then expands on it, introducing us to Sebastian Shaw (Kevin Bacon), a powerful mutant working with the Nazis as an expedient way of discovering other similarly powered individuals. Despite extolling a philosophy of mutant superiority and brotherhood, Shaw is perfectly willing to kill Erik's mother to get him angry enough to use his powers, turning the boy into a self-proclaimed “Frankenstein's monster” in the process.


At roughly the same time, the pampered young Charles encounters Raven in the kitchen of his family mansion. The girl is using her shape-shifting abilities to pose as his mother, but Charles doesn't even need to use his own power, the ability to read minds, to see through the ruse: his mother never sets foot in the kitchen. Nonetheless, he's pleased to find another mutant like himself, and evidently convinces his parents to let him keep the young girl as if she were a lost puppy. 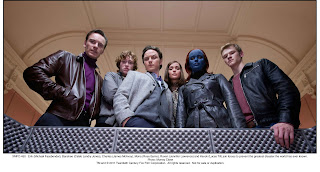 The three mutants ultimately come together in 1962 under the auspices of CIA agents Moira McTaggart (Rose Byrne) and an unnamed black ops director (Oliver Platt) in order to stop Shaw, still looking as youthful as he did two decades ago. With a scheme even the most delusional Bond villain would send back to the drawing board, Shaw plans on using the Cuban missile crisis to start World War III.


Shaw believes this will only harm humans. Mutants, he reasons, were created by radiation, and will therefore be immune to the fallout from a nuclear war. I'm not sure what's supposed to protect them from the explosions and fire that generally accompany mass warhead detonations, or any of the other collateral effects, but who am I to second guess a super villain?
Aiding Shaw in his plot is a group of mutants called Hellfire Club, the most notable being Emma Frost (January Jones), a telepath who can also turn her skin (which her outfits frequently display a good deal of) diamond hard. Charles and Erik assemble a team as well. Hank McCoy aka Beast (Nicholas Hoult) gets the most screentime, developing several gadgets and coming up with group uniforms. He also has a tentative romance with Raven. The rest of the team aren't defined much beyond their powers, teenage enthusiasm, and inexperience. Well defined characters or not, inevitably this “first class” must face off against Shaw's diabolical club as the fate of the world hangs in the balance. 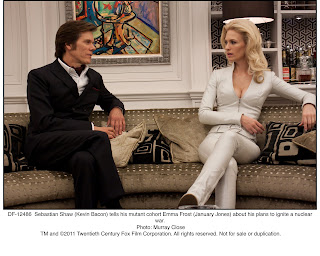 Aside from the problems I've already touched upon in my synopsis, there are other issues. For starters, FIRST CLASS never really feels rooted in its era. Oh sure, you've got the Cuban missile crisis as a plot device, but as far as the look of the film there's not a lot that screams “sixties”. Most of the action takes place at a high tech CIA facility, on board Shaw's futuristic looking submarine, and at Xavier's timeless mansion.
Despite clocking in at over 2 hours,X-MEN: FIRST CLASS still has to do a lot of cinematic shorthand to get across important plot points. We still get the gist, but an awful lot feels rushed and bare bones. I think a simpler, more focused plot, probably with a few less characters, would have made for a better film.
FIRST CLASS also lacks the thematic weight of the first two Bryan Singer directed X-films. The subtext of the X-Men movies has always been about discrimination. Yet despite being set in the perfect era to address that issue more directly, nothing is done with it here. There are minority members of Charles and Erik's team – the African-American Darwin (Edi Gathegi) and the bi-racial Angel Salvadore (Zoe Kravitz) – but the opportunity is never seized to mention the civil rights struggle then going on, even though these characters would surely have been discriminated against on the basis of skin color as much if not more than their mutations, which can be hidden. On top of that, the Darwin character really gets the short end of the stick with his story arc.
By this time it might sound as though I hated the movie. That's not the case. When the it keeps its focus on Charles, Erik and Raven and main adversary Shaw, X-MEN: FIRST CLASS is pretty engaging stuff. Director Matthew Vaughn keeps the film rolling along in a fun, breezy fashion despite its length, and as he already proved in last year's KICK-ASS, the guy can shoot a decent action scene. Although far from faithful to the comic book source material (impossible given the continuity of the other X-Men films), there are a few scenes here that really capture the spirit of the early issues when the team were all teenagers, particularly when the young team cut loose with their powers irresponsibly, and in the training sequences.
It's certainly better than X-MEN: THE LAST STAND and X-MEN ORIGINS: WOLVERINE, although that's setting the bar pretty low. It compares less favorably with the first two films in the series. I would have liked a little more thematic weight and a little less clutter, but as escapist fluff it's not bad. But in a year that's so crowded with superhero movies that this is the second film of 2011 with Bacon as the villain (the first was SUPER), I'm not sure if “not bad” is good enough. 2 1/2 out of 4 stars.
Posted by Bob Ignizio at 12:01 AM