[UNCLE BOONME WHO CAN RECALL HIS PAST LIVES screens Thursday June 16th at 5:30pm and Friday June 17th at 9:50pm at the Cleveland Cinematheque.] 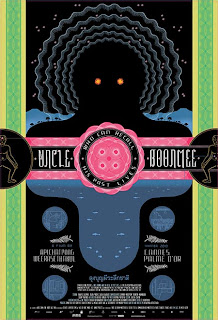 Sometimes “understanding” a film in a cerebral sense can demystify its charm, break its spell, and strip it of wonder only so it can be easily digested then excreted along with whatever else the viewer consumed that day. In the case of UNCLE BOONMEE, Thai director Apichatpong Weerasethakul’s latest film, the urge to master it will ultimately succumb to the desire to marvel at it. That is not to say this isn’t a deeply philosophical work to be engaged with a quickened intellect, but its surreal blend of mythologies, representational styles, and moments of mundane beauty will inevitably befuddle those seeking to couch Truth in purely rational terms. This is a film that confidently blurs not only various imaginings with a traditional narrative reality, but in doing so also manages to be avant-garde and nonlinear in a playfully natural way.


Boonmee (Thanapat Saisaymar) is dying of kidney failure on his farm in Northeastern Thailand, and he is tended to by (possibly illegal) Laotian workers and his nephew Tong (Weerasethakul), who helps him with his dialysis. He is also joined by his sister-in-law Jen (Jenjira Pongpas), who seems more afraid of the immigrants than the ghosts that arrive early on. Boonmee’s wife, Huay (Natthakarn Aphaiwong), had been dead for 19 years before she materializes at the dinner table, soon after joined by Boonmee’s long missing son, Boonsong (Jeerasak Kulhon). Boonsong had left home in pursuit of mysterious “monkey ghosts” that he discovered in a photograph, and has now returned years later as a hirsute creature with glowing eyes, completely transformed by mating with these elusive beings in the tropical mountains. Naturally, such a family reunion involves breaking out the photo albums to reminisce about old times, and it is an odd thing indeed to see a soft-spoken sasquatch and the ghost of a man’s dead wife thumbing through the pages of their former lives.

The film ruminates, in part, upon the corporeal shells spirited by whatever essence pours into them. You have ghosts detached from time and space, creatures inhabiting only shadows, a water buffalo imbued with the past consciousness of a man, and a princess who identifies with her youthful reflection in the water more than her actual face. Luckily, her melancholy is soon soothed by intercourse with a talking catfish, which is again a re-contextualized sentience. Later, when Boonmee and his caretakers hike deep into a jungle cave, it almost seems like a journey into the womb of all things; the place from which vague desires become discreet, and the cycle of life is perpetually shuffled.

Interestingly, the transmigration of spirit seems to happen concurrently in parallel dimensions as well, adding a whole other wrinkle to the fabric of existence when Jen and Tong are able to inhabit two different locations simultaneously, perhaps bringing theoretical physics into conversation with Buddhist cosmology. Other themes explored here relate to the temporal intransigence of photographs, navigating the spaces between representation and reality, and even a touch of sociopolitical commentary on militaristic Thai nationalism, especially in the ties between present day Isan and the Isan where Boonmee laments having killed many Communists as part of the Thai army. He also regrets killing so many insects throughout his life, and in both instances Jen suggests that it was his intentions that mattered most… at least with regard to karma.

This movie transpires like a dream, and leaves you tinged with its sad beauty, which clings because of its lightness rather than by being overbearing. In a way, Uncle Boonmee can be seen as succeeding at every point where the ham-fisted art-drama of Aronofsky’s THE FOUNTAIN failed. What makes UNCLE BOONMEE so compelling, in part, is that it explores without becoming at all didactic. What makes it unforgettable is its haunting imagery, its organically hypnotic sound design, and most of all, its subtle emotional resonance. Whether it is the simple act of sharing tamarind and honey, or a heartfelt conversation between a dying man and his ghost-wife, these moments of togetherness gain more importance than the artifice of plot, which holds true in both in movies and in life. Like Boonmee’s dead wife says: ghosts attach to people, not places. As transitory beings, perhaps the only perduring light is the one glimpsed within glowing eyes. It is fair to say I was completely charmed by UNCLE BOONMEE, even if I don’t have it neatly deciphered. 4 out of 4 stars.
Posted by Ben at 2:52 AM