[THE TREE OF LIFE opens in Cleveland on Friday June 10th exclusively at the Cedar Lee Theatre.]
Review by Bob Ignizio 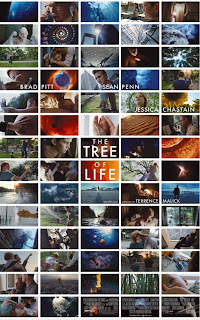 At the beginning of Terrence Malick's THE TREE OF LIFE, just after the quotation from the book of Job and the first of many shots of a glowing womb-like orifice, we are informed in voice-over narration that there are two paths in life: the path of grace, and the path of nature. These paths are represented as a married couple played by Brad Pitt and Jessica Chastain. Pitt embodies the path of nature as selfish and destructive, while the path of grace taken by Chastain is put forth as the superior way of life. However, since the path of grace requires those who take it to love everyone and everything unconditionally to the point that they become doormats, I'm not so sure I'm sold.
We see the effects each parent has on their three children through the eyes of eldest child Jack (Hunter McCracken as a child, Sean Penn as an adult). Mostly the kids have a pretty good life, except for the times when dad acts a bit too authoritarian. Early on we learn that one of the kids dies as a teenager. I don't recall the film ever explaining this further, but perhaps I missed the somber whisper of narration that explained that detail. Or maybe I was too busy trying to figure out why Malick felt he needed to show the entire creation of the earth, the beginnings of life, the extinction of the dinosaurs, and so on in a lengthy segment that feels like something out of Kubrick's 2001: A SPACE ODYSSEY, a feeling reinforced by the classical music soundtrack.
Regardless, Jack is having a hard time as an adult. He appears to have a succesful career, but money can't buy happiness. It can, however, provide the sort of financial security that enables Jack to take off on some extended navel gazing as he looks to his past in hopes of finding meaning for his present. In addition to the childhood flashbacks and nifty dinosaur footage, this also involves a fair bit of wandering about on a beach and walking through portentous looking doorways.
THE TREE OF LIFE is the kind of bold visionary film that has only rarely graced theater screens since the late sixties and early seventies, when challenging fare like 2001 and Nicholas Roeg's WALKABOUT wasn't quite so scarce as it is now. Malick's film ultimately doesn't measure up to either of those classics, but you still have to admire the fact that he swings for the fences here. The film is pretentious, hard to follow at times, tool long, and its themes simply did not resonate with me. And yet it can also be a hypnotically enthralling cinematic experience thanks to the stunning visuals employed to illustrate its half-baked and heavy-handed metaphysical themes.
While Malick's themes didn't work for me, that's not to say the movie doesn't convey them well. Even when details of what passes for plot here become murky, most viewers will have no problem picking up on the message the film is trying to get across. Some may even be moved by it. And while I wouldn't recommend the casual moviegoer simply looking for entertainment should go see THE TREE OF LIFE, those longing for an alternative to all the superheroes and sequels at the multiplex may well be grateful for the respite Malick's film offers, even if they end up feeling as I did that it doesn't quite measure up to its ambitions. 2 1/2 out of 4 stars.
Posted by Bob Ignizio at 12:01 AM