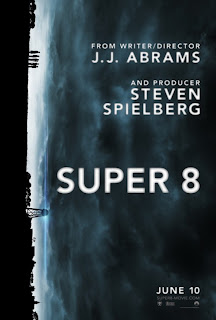 Writer/director J. J. Abrams' new film SUPER 8 is an homage to the classic works of its producer, Steven Spielberg. It combines the sci-fi wonder and awe of CLOSE ENCOUNTERS OF THE THIRD KIND and E.T. THE EXTRATERRESTRIAL with the roller coaster scares of JAWS, but it's the film's genuine emotional core and themes of loss and acceptance that keep it from sinking into mere nostalgic pastiche.
As SUPER 8 begins, twelve year old Joe Lamb (Joel Courtney) is dealing with the death of his mother. Guests at the funeral home talk about how Joe's father Jack (Kyle Chandler) will step up and be more of a parent, but four months later father and son barely see each other, let alone talk about their mutual loss. Jack throws himself into his work as deputy sheriff of Lillian, OH, while Joe finds solace doing make-up work for a Super 8 zombie film being directed by his friend Charles (Riley Griffiths).
Rounding out the gang of friends and would-be filmmakers is Preston (Zach Mills), Martin (Gabrial Basso) and pyromaniac Cary (Ryan Lee). Feeling the film needs a love interest, Charles also recruits Alice (Elle Fanning) to join the cast. She's less than thrilled to see Joe is part of the crew, since Joe's dad has it in for her father Louis (Rod Edlard), but nonetheless agrees to stay on.
In the interest of avoiding spoilers, I'll simply say the kids witness a train crash while out filming late at night. Something escapes from one of the train cars, and boxes containing strange white cubes are scattered throughout the wreckage. The air force comes swooping in mere seconds after the crash, led by Colonel Nelec (Noah Emmerich). As is usually the case in movies like this, the military isn't exactly forthcoming with answers, even for Deputy Jack.
Where most modern films would go into full-on action mode at this point, SUPER 8 instead opts to build slowly. Strange phenomena begin to take place in town. Dogs run away. People disappear. The electricity comes and goes. We see brief glimpses of something big and powerful throwing things around. But mostly, we get honest to goodness character development and serious but far from heavy-handed examination of the film's themes, which Abrams manages to tie in to the monster-on-the-loose portion of his story without it seeming too contrived. Maybe one or two moments are a bit too on the nose (a conversation between Joe and Jack about how Jack is the only one left to protect the town, and Jack suddenly realizes he's the only left to protect his son comes to mind), but considering how devoid of any actual themes or emotion most action and sci-fi films are these days, it seems a minor complaint.
Aside from the Spielberg worship, the film also feels influenced by another Steve, namely Stephen King. Sure, E.T. featured s group of adventurous kids, but these characters feel more like the gang from The Body (filmed by Rob Reiner as STAND BY ME), and especially IT. There's a lot of the same kind “childhood viewed through the lens of nostalgia” reminiscent of King's work, complete with pop culture references to things like Wacky Packages, Dick Smith's make-up guide, and (of course) Aurora monster model kits. But the film's fondest nostalgia is reserved for the sort of amateur super 8 filmmaking that was the entry into directing for guys like Spielberg and Sam Raimi when they were kids. (For those of you under 30, super 8 film is what people used to shoot home movies on back in the stone age before camcorders and videotape, which are of course obsolete as well now that everyone has a high-def camera on their cell phone.)
The late comedian Bill Hicks often said in his act that demons had been set loose to lower the standards of the earth, and he was right. In today's movie climate where originality is seen as a commercial liability by the demons running major Hollywood studios, a heartfelt homage like this feels positively fresh next to the remakes, sequels, and movies based on “properties” with a “proven track record” in other mediums.
The big question is, does SUPER 8 measure up to the films it pays homage to? For the most part, I think the answer is yes. JAWS is just about perfect in my book, but at the risk of being labeled a blasphemer, I think CLOSE ENCOUNTERS and especially E.T. have their share of flaws. Only time will tell if SUPER 8 will be as fondly remembered years down the road, but in the here and now, it looks pretty damn good. 3 1/2 out of 4 stars.
(Oh, and be sure to stay through the closing credits to see the finished super 8 zombie movie the kids were making.)
Posted by Bob Ignizio at 12:01 AM