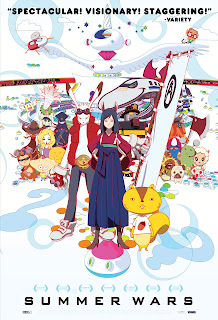 There have been any number of science fiction films that serve as cautionary tales about the dangers of computers and too much technology. Movies where people get sucked into video game battle arenas, or our robot overlords turn on us. Such films can be fun, but nuanced they usually aren't.
The recent anime film SUMMER WARS, on the other hand, does a great job of showing both the promise and perils of a world in which everything and everyone is linked together through social networking. It manages to do this against a backdrop of budding high school romance and multi-generational family drama, and despite an unusually large number of important characters, it never feels confusing or cluttered.


The plot is set in motion when popular girl Natsuki (Nanami Sakuraba) hires math whiz Kenji (Ryunosuke Kamiki) to help out at her grandmother's (Sumiko Fuji) 90th birthday party. What Kenji doesn't realize is that he's been duped into posing as Natsuki's fiancé. He decides to go along with the ruse, and gets a hard time from most of Natsuki's large extended family.
The first night at granny's house, Kenji gets a mysterious text message on his phone with a series of numbers. Realizing it's a code, Kenji solves it and emails the answer back to the unknown sender. The next morning he wakes to find himself on TV, accused of hacking into Oz, a hugely popular social networking website that is interconnected with most government and social services, and even the pentagon.
It turns out the mysterious code Kenji solved was sent to him by a rouge AI going by the decidedly non-threatening name Love Machine.  Love Machine begins quickly taking over user accounts in Oz and using them to access other, more sensitive computer systems. With the help of his friend Takashi (Takahiro Yokokawa) and several members of Natsuki's family, including Kazuma (Mitsuki Tanimura), a master fighter in the virtual world, Kenji sets out to stop the AI. From here, the story takes a number of surprising twists and turns, even managing to work a baseball game into the mix.
The main focus of SUMMER WARS is on its human characters and their sometimes rocky interpersonal relationships as they struggle against seemingly impossible odds. Its speculative elements are very much rooted in reality, and one can imagine a scenario like this one happening in the not too distant future. Even the teen romance angle, which could easily have been grating for those interested in the film's more serious themes, is handled satisfactorily.
Where the film comes up short is with its computerized villain. Love Machine is certainly a dangerous and powerful adversary, and the various forms it assumes in the virtual world are suitably impressive looking. But as a character, Love Machine has no personality or compelling motivation. 2001: A SPACE ODYSSEY proved with Hal-9000 that need not be the case. Heck, even WARGAMES, whose computer menace is similarly motivated by wanting to play games, gives us a more intriguing AI.
Even with its bland villain, though, SUMMER WARS is a superior sci-fi entertainment. The animation is vibrant and colorful and the story has both heart and smarts. There are one or two instances in which the exaggerated humor one often finds in anime, and which I don't particularly care for, rears its silly head, but for the most part the film plays it pretty straight. Like Katsuhiro Ohtomo's AKIRA or the films of Miyazaki (HOWL'S MOVING CASTLE, SPIRITED AWAY), this is a rare anime film that even those who normally hate anime can enjoy. 3 out of 4 stars.
Posted by Bob Ignizio at 12:01 AM