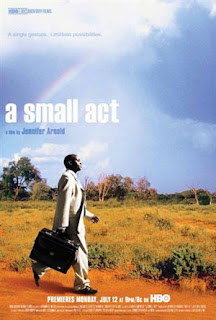 HBO Films' documentary division have brought some noteworthy nonfiction cinema our way, though I wonder if this one will get overlooked as Not Another Africa In Turmoil Movie. That's not fair, and a sit-through of A SMALL ACT may make jaded Americans reconsider their cynicism over all those late-nite TV pleas by actor Mike Farrell on behalf of the poor African children. It turns out one of those poor African children was Chris Mburu, of Kenya. As an ordinary boy in an impoverished village he received a donation to help his primary-school education, the charity contribution made by a complete stranger in faraway Sweden, Holocaust refugee Hilde Back.


Now Mburu is a prominent United Nations official, and he credits Back's "small act" as making all the difference in helping him get through the Kenyan education system and all the way up to Harvard Law School, followed by a globetrotting UN human-rights career. Out of gratitude VIP Mburu establishes a scholarship foundation for his village in Hilde Back's name - without her even knowing about it.

It's a fetching mix of the high-concept with sensitive reportage. On the one hand there's the reverse COMING TO AMERICA deal of the rather bewildered Hilde Back in Sweden learning that her foundation exists in the first place, and being brought to Kenya to meet Mburu for the very first time. Then there is an extensive sidebar about the pressure felt by Kenyan schoolchildren to excel in exams to earn them the coveted Hilde Back Foundation scholarships that determine their entire futures, and scenes of the village kids awaiting their test verdicts (delivered via an apparently dysfunctional cell phone system) reach SPELLBOUND proportions for suspense and heartbreak. Meanwhile, in the background, a contested Kenyan presidential election suddenly threatens to explode into civil war with overtones of tribal genocide, and the point is driven home about the value of a proper education (made possible by those such as Back) as a bulwark against ignorance that breeds aggression and warlords.
Everything clicks in this symphony of ingredients, masterfully conducted by director Jennifer Arnold, and you'll be left wondering what you can do for Africa - or at least, regretting making fun of Sally Struthers' tearful pleas back in the old days. (3 1/2 out of 4 stars)