Queen to Play (July 1st and 2nd at the Cleveland Cinematheque)

[QUEEN TO PLAY screens Friday July 1st at 5:30 pm and Saturday July 2nd at 7:00 pm at the Cleveland Cinematheque.] 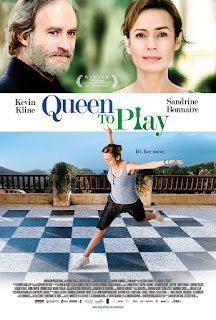 Working class chambermaid Helene (Sandrine Bonnaire) sees Jennifer Beals and her boyfriend playing chess on the balcony of their hotel room and immediately becomes struck with the notion of learning to play the game herself. To this end she buys an electronic chess set for her construction worker husband Ange (Francis Renaud), who clearly does not share her interest. So Helene plays against the computer at night.


Eventually Helene decides she needs a tutor. Fortunately Kroger (Kevin Kline), the widower whose house she cleans, is an accomplished player. He's also, in tried and true movie tradition, a curmudgeon with a heart of gold. After some obligatory cranky grumbling, Kroger eventually takes Helene under his wing. Gee, do you Helene will compete in a big tournament at the end of the movie?
Bonnaire gives a fine central performance and Kline is good even playing such a cliched character. The problem is that director/co-writer Caroline Bottaro hasn't given her film any dramatic weight whatsoever. Helene's teenage daughter is going through a slightly rebellious phase, there are some money problems, and Ange displays some slight jealousy over his wife's chess lessons, but none of these issues ever feels like anything more than a minor bump in the road.
Even the theme of female empowerment (it's mentioned more than once how the Queen is the most powerful piece in chess) barely registers. Helene may be a bit subdued when we first meet her, but I never got the impression she was severely lacking in self confidence. Nor did she seem to have gained much additional inner strength from her experience learning chess. All we're left with is essentially a French arthouse version of THE KARATE KID with chess instead of martial arts, and no rival bad guy chess players to make things interesting. 2 out of 4 stars.
Posted by Bob Ignizio at 12:01 AM