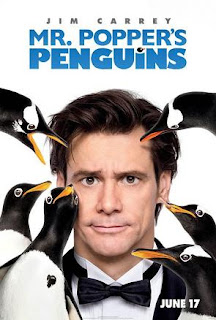 How many penguins can Mr. Popper possibly parent in his penthouse apartment before the penguins prompt a popping of Popper’s top?

Popper’s paradigm is pancaked when he unexpectedly procures six Gentoo penguins via post.  They’re a “souvenir” inheritance from his globetrotting father, who hopes to teach Tommy “Tippytoes” a life lesson from beyond the grave.


Our perturbed protagonist grapples with the denial and anger expected of someone whose life is co-opted—like Charles Grodin’s frazzled father in BEETHOVEN’S 2ND—but who eventually (and unsurprisingly) comes to embrace his destiny.  Popper’s transformation from Scrooge to Dr. Doolittle is as predictable as the reactions of his wonderstruck family and mortified colleagues, who don’t know what’s come over him.  But Carrey sells it.


The pesky penguins push his buttons.  But if Popper’s gonna panic, he wants to impugn the responsible parties.  So he offhandedly gives each cold-weather culprit a name to match his or her disposition (since they’re virtually identical).  There’s three females—Captain, Bitey, and Loudy; and three males—Stinky, Nimrod, and Lovey (who may have impregnated one or more of his lady counterparts).  All are “voiced” by Frank Weller, who’s been doing the talking for animated TV icons since 1969 (SCOOBY-DOO).


It’s up to plastic-profiled Carrey—a near-perfect purveyor of slapstick—to convince us his character’s emotional metamorphosis is genuine.  And he does, largely by subjecting himself to perilous pratfalls and penguin poop. Carrey’s chemistry with Lansbury is amusing; when Popper drops lyrics from “Lucy in the Sky With Diamonds” into a sales pitch, Van Gundy deadpans that she doesn’t do drugs.  And his personal page, Pippi (Ophelia Lovibond), possesses the precocious predilection of purposefully employing words with the bilabial plosive pi pronunciation.

Popper's paternal proceedings precipitate a patching-up with his kids—and reignites the romance with estranged wife, Amanda (Carla Gugino).  But it won’t be easy winning back his sweetheart or avoiding self-serving Zookeeper Jones (Clark Gregg, "Agent Coulson" from IRON MAN and THOR)—who wants the penguins for their "trade value.”  Oh, and Popper must also buy his doorman's silence, lest the building superintendent discover the polar pets (shades of Will Ferrell in CURIOUS GEORGE).  It’s primarily during these parts—when Popper perceives a permanent parting from the penguins and his own patriarchy—that the picture’s pathos percolates.  Director Mark Waters (SPIDERWICK CHRONICLES, MEAN GIRLS) has a knack for knitting kid-friendly fare without alienating grown-ups.  2 out of 4 stars.
Posted by Peter M. Roche at 12:01 AM