Making the Boys (June 17th at the Cleveland Museum of Art) 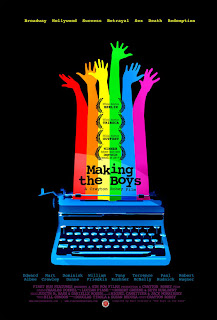 MAKING THE BOYS starts with a montage of present-day young gays and trannies, probably jamming on their fabulous Glee-hood, who have no clue about anything called The Boys in the Band or who a guy named Mart Crowley is. The documentary feature proceeds to fill in the blanks about that, and how The Boys in the Band, the 1968 off-Broadway play - subsequently made into a motion picture directed by William Friedkin - was a breakthrough in the portrayal of homosexuality in the American media.

The Boys in the Band was (and is) a frankly bitter comedy-drama, a loosely-plotted bitchfest in which a bunch of neurotic NYC queers convene for the birthday party of one of their own whom they've fixed up with a male hooker for the night. However the dialogue might drip with cynical self-loathing and borderline stereotypes, unlike similar portrayals in the dramatic arts up to that time, none of the Boys in the Band turn into monster serial killers and/or commit suicide in the end. None get hauled off to the insane asylum, none get eaten by a cannibal lynch mob (a memorable exit for a Tennessee Williams gay character), and no stern folks in lab coats handing out pamphlets to the audience on advice for where to seek a "cure." It was avidly patronized by mainstream audiences., written by an out-of-closet gay playwright, performed by mostly gay actors and addressed uncomfortable gay issues. "It was not positive," wrote the late Vito Russo of Boys, "but it was fair." Without it, we're given to understand, no Will and Grace, no PHILADELPHIA or even Glee may have been possible.

The docu-feature covers a lot of bases, sometimes getting a little frazzled in the process. A major angle is a mini-bio of playwright Crowley. He complains of being a frustrated NY-LA writer whose drugs/alcohol/southern family background was pure Eugene O'Neill and Tennessee Williams - thus the trouble in getting his creative career going, because O'Neill and Williams had already covered that ground. Aspiring scriptwriter Mart still managed to fall in with a gay-friendly glamor crowd in Hollywood including Dominick Dunne, Robert Wagner and Natalie Wood, Roddy McDowell, Rock Hudson, Bette Davis and more. The Boys in the Band rose out of a career slump, and even with the likes of Edward Albee disapproving of its warty take on gay life, it wound up being a smash - so much so that with the line of New Yorkers around the block it charged an electrifying $10 per show. Crowley tells us, ruefully and predictably, that he never was able to type out a hit of any stature since, though he's lived comfortably, especially since Wagner invited him to produce his Hart to Hart TV adventure show.

Meanwhile some Boys cast members - most of whom duplicated their roles for the William Friedkin movie - went on to steady careers, whilst others succumbed to AIDS, and a few deliberately dropped from sight. The game plan of MAKING THE BOYS, after a while, becomes a snapshot of modern gay history through a Boys-colored lens, the Stonewall riots jammed in there (sorry, no polite way to say it), HIV, and, now, acceptance to the point that, coming full circle, one gay commentator says that Crowley and Boys made it possible for today's gay young people to be as ignorant and stupid about their history as any other American kids nowadays. It's a fun illumination-appreciation by director Crayton Robey, and it has the virtue of not parsing the play scene-by-scene. What transpires is that by the end, gay or not, you're actually potentially more interested in seeing Boys in the Band than you'd otherwise be. I've seen other Cliffs Notes documentaries that don't quite accomplish that in their over-analysis.

Alice-in-Wonderland sidebar: Time was, not so very long ago, an explosive documentary or expose would "out" some prominent person as gay. In 2011, MAKING THE BOYS explosively "outs" a world-renowned actor as emphatically not gay - the late Richard Harris, characterized as a glowering homophobe. So there was a straight actor somewhere; turned out to be Harris. And dude even did musicals! Don't know if that changes your opinion of his Albus Dumbledore or not. Of course, Harris may have only been "in character" studying to play a homophobe and taking the work home with him. Happens all the time, damn thespians.
Nonetheless, if the charge is true, who knows how many other non-gay actors are lurking out there in the underground? Hiding their vice behind lovely "beard" Hollywood wives (whom they may be secretly sleeping with for real!), snarky Tweets and TV sitcom roles. I've got my eye on Neil Patrick Harris in particular. Same last name even. Where's Sen. Joseph McCarthy when we need him? The Advocate should do a special investigation into this national scandal of closeted non-gays in the performing arts and whatever their threatening influence and agendas may be.

But if The Advocate does that I'm afraid what may befall my already dying media career if it leaks out that I'm... secretly not gay either (I just get assigned all the queer-specialty movies by my publishers). The burden of being not gay haunts me continually. I have several computers, their hard drives damningly vacant of porn, that I'm afraid may be seized. And if anyone looks into those Judy Garland LPs on my shelf and finds that inside the album jackets they're really all Firesign Theatre comedy and prog-rock concept albums I'll be forever blackballed. And the rainbow flags and bedsheets? They just came with the home, were here when we got here. Maybe I should write a cathartic play about bitter straight guys renting a prostitute for their friend for his birthday, except who would believe it? (3 out of 4 stars)
Posted by Charles Cassady Jr. at 1:30 PM