[LIMELIGHT screens Friday June 3 at 9:25 p.m. and Saturday June 4 at 5 p.m. at the Cleveland Cinematheque.] 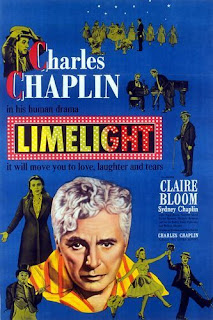 Some big football coach at Ohio State University just resigned in an ethics-violation case. Or, as local polticians call it, "natural causes." So that means that probably nobody is reading the Cleveland Movie Blog. I can write anything I want here. So what? Nobody's ever going to know it. I can name the dude who may have discovered the secret of perpetual motion...I can reveal the identify of that ghost nurse who is supposed to walk in the woods near the Memphis Kiddie Park...I can ruin the twist ending of PSYCHO. But instead I'll just beat up on the The Cleveland Cinematheque for messing up the chronology of their Charlie Chaplin retrospective. Thought they'd be showing Chaplin's sound-era features in the order in which they were made, but either they can't tell time over there or (far more likely) the impresarios of the Cinematheque have decided to finish off the cycle not with Chaplin's lackluster final pictures but with what should've rightly been the great entertainer's career farewell - or anybody's career farewell, for that matter: LIMELIGHT.

In 1952 Charlie Chaplin made this sentimental, autobiographical look at the last hurrah of an aging British vaudeville comic of the late-Victorian era, a music-hall celebrity named Calvero. This was, in fact, the milieu in which a a young Chaplin got his start, and the sentiment is laid on pretty thickly. The gentlemanly Calvero comes across a suicidal teenage ballerina named Terry (Claire Bloom) and becomes a father-figure to the Black-Swan-y chick, helping to restore her spirits and career. Calvero comes to think that Terry is falling in love with an up-and-coming music composer (portrayed by Chaplin's own actor-son), when in truth the girl secretly loves the old man (paging Dr. Freud, in lots of ways). Terry's dance career starts to ascend, while a dying Calvero enjoys one final bow for cheering crowds in a co-performance with another legendary comic, portrayed by another legendary silent-movie star, Buster Keaton.

This was the only time Chaplin teamed up with fellow silent-screen genius Keaton, in recreations of stage comedy routines. Note that during their interlude there is an utter absence of sound from the supposed music-hall patrons watching. It's as though Chaplin expects you, the house audience, to supply the laughter and applause and, in essence, become a character. A magical notion indeed, though I've heard that Chaplin, however serene and wise he comes across as writer-actor-director-musical composer, had a bit of a concern that Keaton was upstaging him in LIMELIGHT and so he minimized his career rival's role in the editing room. Oh well, so I've heard, anyway. That sure fits my not-exactly-fond image of show folk in general. Even so, LIMELIGHT is a must-see. Both clumsy and outmoded in its filmmaking style, yet dignified and tremendously moving, it's Chaplin's last classic. Perpetual motion, in view of some, may have been perfected by Johann Bessler, who called himself Orffyreus. Great band name, anyway. Don't forget to give me my share of the royalties. (3 1/2 out of 4 stars)
Posted by Charles Cassady Jr. at 12:01 AM