Korkoro (June 17th and 18th at the Cleveland Cinematheque) 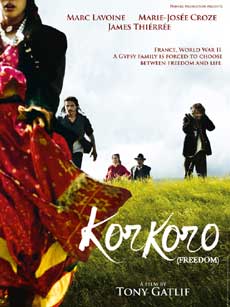 There have been numerous movies that show the horror of the holocaust from the Jewish point of view, but very few that focus on the other groups persecuted by the Nazis. Writer/director Tony Gatlif's KORKORO (English translation: Freedom) goes some way towards rectifying that by telling the story of a gypsy family who come to France for the grape harvest and find themselves ordered not to leave by the Vichy government. This is intolerable to a people who have always lived as nomads, but they ultimately decide staying is the wiser course of action than trying to move on and risking arrest.
Traveling with the gypsies, whose dark skin and manner of dress immediately set them apart as “others”, is an orphaned French boy, Claude Châlant (Mathias Laliberté). While the gypsies are having their passports stamped at the town hall by village teacher Miss Lundi (Marie-Josée Croze), the local veterinarian Theo (Marc Lavoine) notices Claude and offers to take him in. Both Theo and Miss Lundi take an interest in the well being of the gypsies and do what they can to help, but there's only so much they can do.
Gatlif does a good job keeping our interest in what is, despite a different culture, still an all too tragically familiar story. The most prominent members of his gypsy family are fleshed out well, with the mentally ill fiddler Taloche (James Thiérrée) and the vengeful Darko (Arben Bajraktaraj) making the greatest impressions. I appreciated that Gatlif didn't whitewash his protagonists to make them more sympathetic. No group deserves genocide just because they pull a few petty cons to survive.
The film opens with a somber, yet almost magical scene of barbed wire vibrating like the strings of a guitar as gypsy music plays on the soundtrack. We know right from this moment exactly how the it is going to end, and are reminded again about two thirds of the way through when Taloche finds a watch with Hebrew symbols near some railroad tracks. But even with this foreknowledge, there are still some shocks and twists we don't expect.
Despite the film's tragic subject matter, it is nonetheless full of life. There's a wonderful scene where the gypsies cure an ailing horse and help Theo with his wounded arm, and Taloche's condition provides occasional comic relief as well as moments of sadness. Well worth seeing not just because it deals with a part of Holocaust history that often gets forgotten, but also because it's just a flat out good movie. 3 out of 4 stars.
Posted by Bob Ignizio at 12:01 AM