Heartbeats (June 3rd and 4th at the Cleveland Cinematheque) 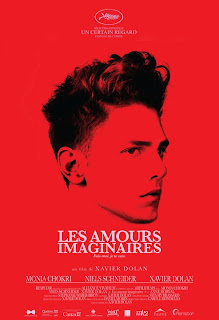 Best friends Marie (Monia Chokri) and Francis (Xavier Dolan) are at a party when a young man with flowing golden curls catches the attention of both. “Who is that self-satisfied Adonis,” Marie asks? The man in question is Nicholas (Niels Schneider), and although Marie and Francis tell each other he isn't their type, both quickly set about trying to ingratiate themselves with him. Nicholas, clearly something of a narcissist, welcomes the attention.


As the three begin spending considerable time together, the sexual tension in the air is palpable. Yet despite several opportunities to do so, it seems as if neither Marie or Francis will make their move. All three even spend the night in bed together with nothing happening. Whether Nicholas is too clueless or so used to having people fawn all over him that he doesn't realize these two are in lust with him, or if he's merely playing games is uncertain. Either way, it results in some funny moments.
HEARTBEATS (Les amours imaginaires) captures both the folly and intoxicating thrill of an obsessive, secret passion. With Nicholas practically a blank slate, he makes a perfect object for Francis and Marie to project their fantasies onto. As long as they don't actually give voice to their feelings, they can continue to have a perfect, if imaginary, love affair with him in their minds.
Indirectly commenting on the action of the main narrative are a number of short interviews in which the subjects speak on love and relationships, often focusing on the degree to which personal perception and self delusion plays a role. “You love the concept more than him,” says one. Another tells of a man she stalks from afar, knowing minute details of his personal life even though she doesn't talk to him. None of the stories cast love and romance in an especially positive light.
Both Dolan and Chokri manage to generate empathy for characters who seem completely shallow and self-absorbed for much of the film, opening up to show us the weaknesses beneath the surface. Schneider not only has the looks but the necessary charisma to make us believe his character could inspire such infatuations despite being kind of a jerk.
In addition to tackling one of the lead roles, the French-Canadian Dolan also wrote, produced, and directed HEARTBEATS, performing admirably in all four tasks. Like its fantasy hunk, HEARTBEATS is perhaps a bit too self-satisfied to be as great as it thinks it is - for example, Dolan's ironic use of slow motion is cute at first, but got old for me by the fourth or fifth time. Still, it's a smart and frequently funny film that makes a fine antidote to all those cheerfully vapid Hollywood romantic comedies that do far more to drag rose-tinted notions of love through the dirt than this film could ever hope to. 3 1/2 out of 4 stars.
Posted by Bob Ignizio at 12:01 AM